Today we left Bristol for the next stop on our honeymoon; Paris!

We washed up and finished packing away our belongings, tidying the room Pete and Laura had graciously allowed us to use on our stay and after making our goodbyes, jumped into the cab to the train station. There are two types of cab in Bristol; funny-looking generic blue cabs, and private hire vehicles. We climbed into the spacious back seat of a big, late model Audi driven by a man who sounded like Hagrid, on our way to Bristol Parkway. This 10km journey cost us £5.50 - I’m guessing because of the time of day - bargain!

Once inside the train station, it was a quick and easy exercise to process our booking and get our travel tickets, which included transfers from Paddington to King’s Cross St Pancras. I’ve mentioned previously how awesome the underground is, using it a second time was confirmation that my first impression wasn’t just a fluke.

The train service wasn’t too busy at first, but I’m glad we had reserved seats as the more stops we made, the more full our coach became and, given we had six or seven of them, I guess the others were much the same. Once in Paddington, we made our way to the Underground - big, clear signs made this super easy - and transferred to King’s Cross (about 17 minutes). It was at this point Rhi tells me that she’s feeling nauseous, on top of the sniffles that had started on Thursday night. Of course this happens on our honeymoon :( 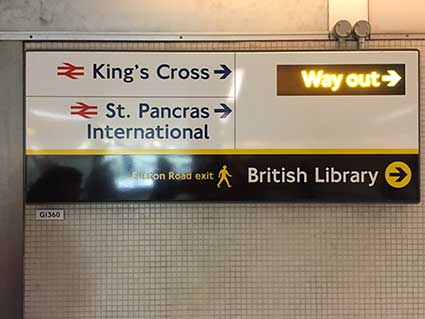 Told you the signage was clear 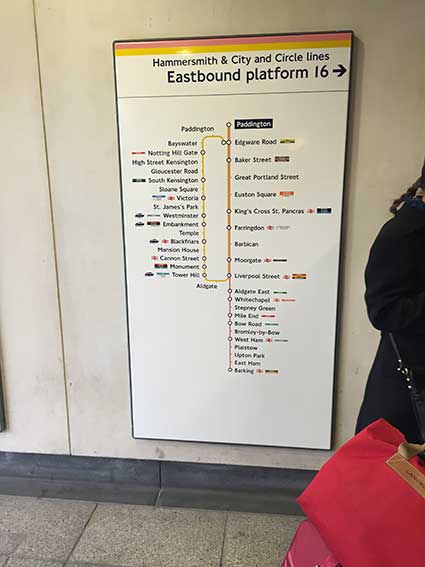 It's easy to ensure you go the right direction

Luckily, we didn’t have long to wait to get through passport control. The clerk didn’t seem interested in his job, stamped our passports and we were into the departures lounge for about five minutes before we were called to board. 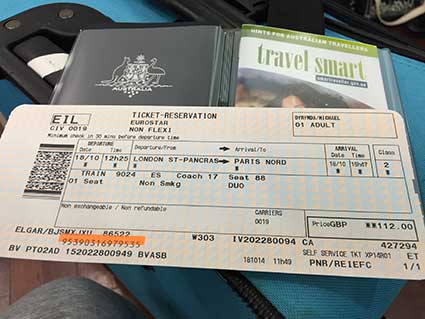 We walked what seemed like an eternity to coach 17 and there were still another five or so after hours. Before long, we were pulling away from St Pancras International. It took me a few seconds to notice, as the Eurostar train is much smoother and quieter than trains I’m accustomed to. A 2 hour 20 minute journey left me enough time for an episode of Curb Your Enthusiasm and to see Chef, which is brilliant by the way, check it out! 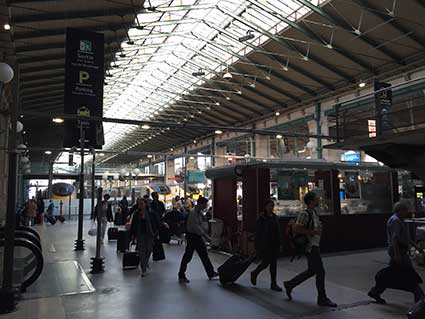 The journey passed by and we were soon emerging from the chunnel and seeing our first French countryside zipping by. We arrived at Gare du Nord just before 4pm local time, got off the train and went to exchange the leftover Pounds we had into Euro. This task took longer than it should have, as there was a lady ahead of us exchanging a couple of thousand Euro.

Once outside, we queued up at the taxi rank to get a cab and watched a uniformed police officer puffing on a cigarette. A few minutes passed and a man approached us asking if we were needing a taxi and where we were going. We informed him we were heading to Timhotel Tour Eiffel and he ushered us towards a cab. The only cab that did not look like any of the other cab, nor did it have any markings. I didn’t think much of it till we were inside the driver’s van. This thing didn’t have ‘free candy’ written on the side of it, though I had a sick feeling in my gut. A few thoughts occurred over the taxi journey:

As it turns out, the hotel was just a long way away from the train station, the traffic was really bad, and the guy knew where he was going but the road our hotel was off of was closed off, so he had to double back. The cab ride, which was about an hour, cost us €75!! Needless to say, we’ll be getting the hotel to arrange a taxi for us to the train station on Tuesday. We’re also going to Gare du Lyon, which is slightly closer and it will be early in the morning (0530!), so there should be much less traffic then.

My first impression of Paris? I wish we stayed in Bristol a few extra days.

Once we checked into our hotel, we both needed a bit of a sit down to see if maybe we could be ok with this place. We’re only staying a couple of days, after all.

After about an hour, Rhi seemed to be feeling much better and had sussed out some of the shops near us. We went for a walk down the street and within 30 seconds, we saw a woman walking towards us carrying two baguettes… “hon, hon, baguette!” In the five minute walk from our hotel to the supermarket, we passed five restaurants, two butchers, three bakeries, a pharmacy, and a laundromat. After purchasing some drinks and snacks, we made our way back to the hotel stopping into one of the bakeries to get some light dinner. Luckily one of the girls in there spoke English.

Once back in our hotel, we watched Stargate Atlantis - in French, neither of us could figure out how to change the language - ate our Pain au chocolat and pear tart (I think, it was delicious), and sipped on our Strawberry-and-something Oasis drink before turning in. Poor Rhi has a case of the sniffles, just what she wanted whilst on honeymoon! Tomorrow we have no plans to leave the hotel, except to visit the bakery to grab some croissants for breakfast, and use the day for a bit of R&R. Hopefully Rhi will be well enough for our three-hour walking tour on Monday. 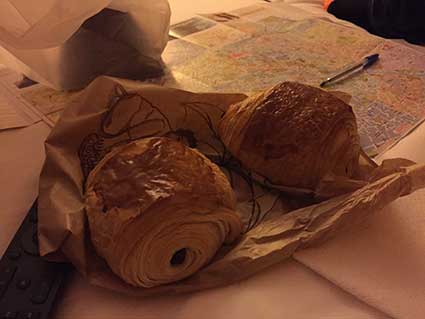 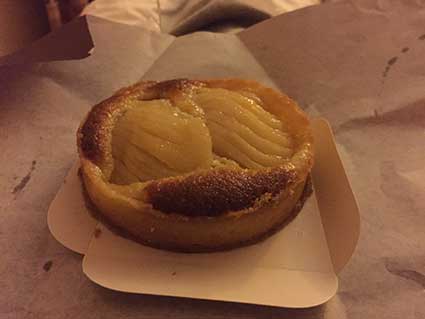