Colosseum, Ancient Rome, and the Best of Rome walking tours

Today we started at 8:45am, getting ready quickly and out of the apartment, to walk the 20 minutes to the Colosseum, which was the start of our first walk of the day - Colosseum and Ancient Rome with City Wonders. On the way, we passed the Altare della Patria - also known as the Monumento Nazionale a Vittorio Emanuele II, a monument built in honour of Victor Emmanuel, the first king of a unified Italy, and is a ‘young’ building by Rome standards, having only been completed in 1925. And thats just on the way to the Colosseum. Like I said yesterday, you can’t turn around without magnificence being shoved in your face. 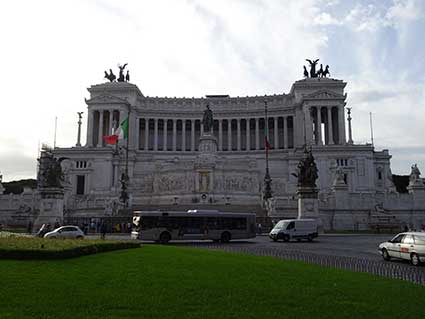 We met up with our tour group at about 9:45am, and headed out for the Roman Forum. We walked through, absorbing the massive amounts of history around us. We’re talking about around 750BC, to the time of Caeser, to Octavio (later the first emperor, renamed as Augustus) through until the Christians took over Rome and basically tore down everything they could to melt down or reconstruct into something else, and converted everything to Christian churches that they couldn’t. One such example was the Tempio di Antonino e Faustina, where you could see the rope marks where it was assumed that they tried to pull down the columns, but when they failed, they simply converted it from a pagan temple into a church.

You could see the levels on the buildings where Rome’s street levels had risen over time, simply rebuilding again and again over the old city. We saw where Caesar was cremated. We saw where the Vestal Virgins were housed. Obviously, not the actual places, but the bones, walls and shadows of what the buildings used to be. With a little imagination, it wasn’t hard to see. Just walking on the cobblestones that had been there for centuries was almost profound. However, it was traumatic to see how much the Christians had stripped, all of the marble, statues, bronze, all carted off or destroyed so many years ago that would have been amazing to see today.

On the way up to the Palatine Hill, we passed by the Arco de Tito, or Arch of Titus. It was constructed in 82 AD by the Roman Emperor Domitian shortly after the death of his older brother Titus to commemorate Titus’ victories, including the Siege of Jerusalem in 70 AD. I mean, nearly 2,000 years old! Insanity!

Up more cobblestone paths to Palatine Hill, and the ruins of the emperors palace that remain. These guys had their own fake lake (complete with having to add in aquaducts to pipe water all the way up the hill), fountains, sporting complex, gardens, I mean, we’re talking absolute opulence here. They certainly weren’t hard up for money. Just the marble flooring (small parts still exist) would have been a fortune, there was marble in pinks, whites, greens, oranges, yellows….a veritable rainbow, and each coloured marble was sourced from different regions of Europe.

We then headed out of the Forum, and towards the Colosseum (it’s next door) passing by the Arco di Costantino or Arch of Constantine on the way. It was erected by the Roman Senate to commemorate Constantine I’s victory over Maxentius at the Battle of Milvian Bridge on October 28, 312AD. These guys really liked to build arches to celebrate just about anything.

We got into the Colosseum in relatively short time, considering the line for the common (non-tour) folk, and perused both levels of the massive structure that was completed in 80AD(!!!). I mean, its huge. The Colosseum could hold, it is estimated, between 50,000 and 80,000 spectators, and was used for public ‘entertainment’ such as animal fights, executions, and of course the famous gladiator battles. Funny story, in 1749, Pope Benedict XIV declared it a ‘holy site’ as so many Christians had died there. Whilst it was good because it stopped people destroying it slowly, and encouraged excavation, sacred? Really?

That concluded tour #1 for the day, and after 3 hours of solid walking our backs were aching again and we decided to hunt out lunch near to where our next tour would be. We caught a taxi to the Spanish Steps, and located the closest McDonald’s so Michael could continue his mission of having McDonald’s in every country.

By this time it was about 2:30pm, and we only had to wait another 45 minutes until our next tour. We chose to spend it sunning ourselves in the square next to the Spanish Steps, as it was 25 degrees but quite windy, so it alternated between pleasantly warm and biting throughout the day. Fun fact: there are peddlers selling “selfie sticks” everywhere in Rome. In the suqare by the Spanish Steps there were also peddlers with bunches of roses - the selfie stick guys give up if you don’t look at them, the rose guys literally jammed then in your face and wouldn’t leave you alone. I nearly beat one to death with his own roses.

Our Best of Rome Walking Tour kicked off at 3:15pm, and we were with a bunch of Americans (they’re everywhere over here), a couple of which we made nice with. We had a quick look at the Steps, then headed towards the Fontana de Trevi, or Trevi Fountain. We went past many sculptures, including the Colonna dell’Immacolata or Column of the Immaculate Conception, which celebrates the reasonably recent dogma of the immaculate conception of the Blessed Virgin Mary in her mother’s womb being free from original sin. 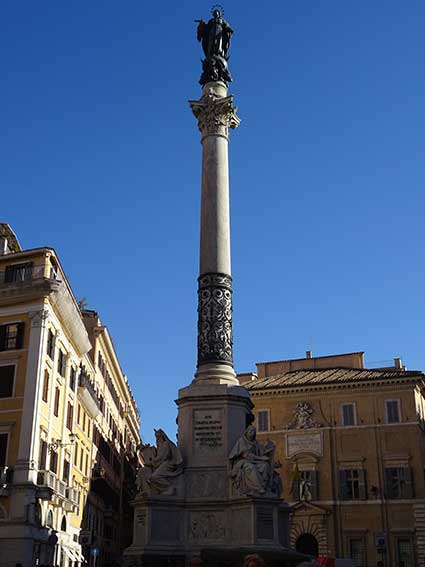 The Trevi Fountain itself is acutally under restoration until sometime in 2015 (or so they say, I’d give it longer) so we couldn’t see it in its full glory, but thats okay. We saw enough glory to not be greedy when it came to this.

From there we set off for the Pantheon, passing by yet more breathtaking columns, churches, a bazillion scooters. The Pantheon itself was crazy busy, but insanely well built still. There have been some works of restoration (especially where it was converted from Pagan to Christian, thanks again guys) but that dome is 100% original, bar a few crack-fillings. It was originally commissioned by Marcus Agrippa during the reign of Augustus (27 BC - 14 AD) and rebuilt by the emperor Hadrian about 126 AD, so that’s a fine looking roof for its age. Barely looks a day over 1,000.

Then we got gelato! I think this was Michael’s favourite part of the day to be honest. I had chocolate fondant and creme brulee, and he had strawberry and vanilla. Mine was clearly better. Although since the tour guide said that it is a saying that Romans eat gelato twice a day come rain, hail or shine, I suspect Michael took that as a directive and will be force feeding me gelato in the coming days to catch up on what we’ve missed. Oh, the hardships.

The tour took us through a few more Piazzas and then we were done for the day! Michael proceeded to take us in the completely wrong direction to home but we figured that out (after a while grumble grumble) and headed back to our apartment. On the way we stopped in to get our Rome souvenir (Michael wanted a full sized proper gladiator helmet, I said our budget wouldn’t cover that) and we got dinner at the same resteraunt as yesterday. Yet again, we got it to go, NCIS: Los Angeles, and just sat! We’re pondering what to do tomorrow, we had planned on a train ride out to somewhere regional but we are both pretty knackered after today. As long as we get to Florence and Naples before we go, we’ll be happy! So tomorrow may be a rest and gently explore day, hopefully find a laudromat and a grocery store reasonably nearby, before our full day Vatican tour on Friday.