On this lovely Sunday morning we set off for our last planned tour, of the Villa Borghese Gardens and the Galleria Borghese. Once again, it was about half an hour walk for us to get there, and the tour started at 8:45am. Rome was supposedly built on seven hills, and I swear we walked up all seven to get to the gardens! 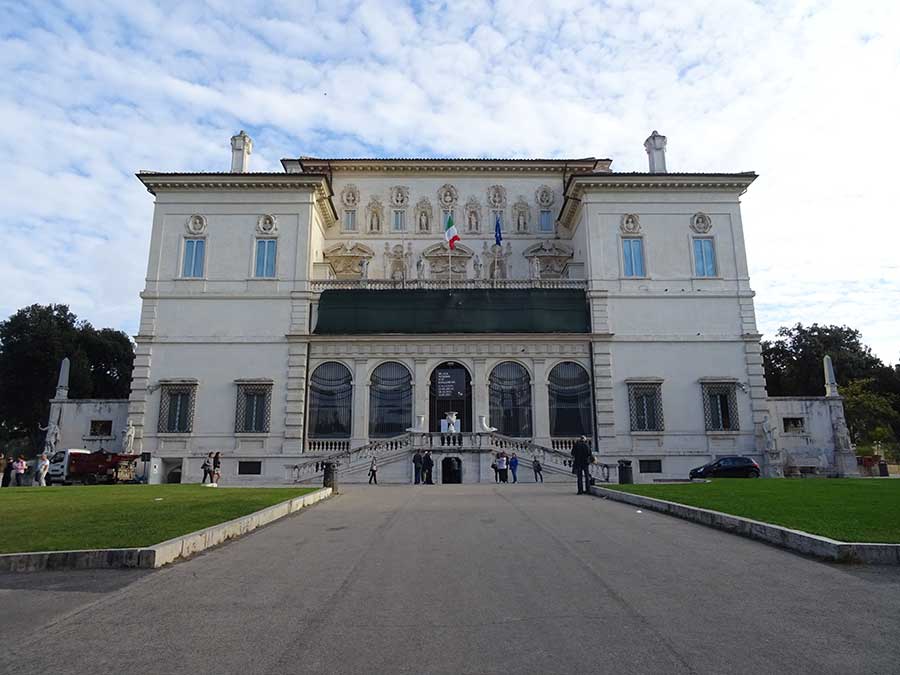 The tour was once again by City Wonders, and I have to say, if you ever want a tour, go through these guys. Every tour we’ve done with them (which has been all of them bar the Paris tour) has been absolutely brilliant. They give you little headset packs, so that the guide can talk right into your ear, and you never miss anything.

Our tour guide this morning was Violette, a lovely lady from Paris, who had spent the last few years in Italy finishing her degree in Arts, and as it turns out is leaving Rome in a few days, back to Paris as she had been accepted for her PhD. As a result, she was the perfect person to take us throught he first part of our morning tour, through the Galleria Borghese.

The Galleria Borghese houses a substantial part of the Borghese collection of paintings, sculpture and antiquities, begun by Cardinal Scipione Borghese, the nephew of Pope Paul V (reign 1605–1621). Scipioni was inducted as a Cardinal 2 months or so after uncle dearest was made Pope - nepotism at its finest. He was the richest man in Rome at the time, and basically bought, stole or threw the original owners in jail of any artwork he wanted, as he was a great lover of art, particularly the works of Gian Lorenzo Bernini and Caravaggio.

We had two hours (and two hours only, the Galleria are very strict about that) where we were shown some true masterpieces - the marble statues alone, my god! How they could sculpt such hard stone into such fine works is mind boggling. Photos honest to goodness do not do these works of art justice, some of the fine details just have to be seen in person. The emotion in the face of ‘Rape of Proserpine’, or Daphne turning into a tree, with leaves springing from her fingertips in ‘Apollo and Daphne’, and its all carved in a single block of marble! Bernini was a true genius. ‘Goat Amalthea with Infant Jupiter and Faun’ was reportedly his first work, done (its argued) somewhere between when he was 9 and when he was 13. His father, also a famous sculpter, basically gave him a slab of marble and said “go your hardest, son” and out comes a work of art. 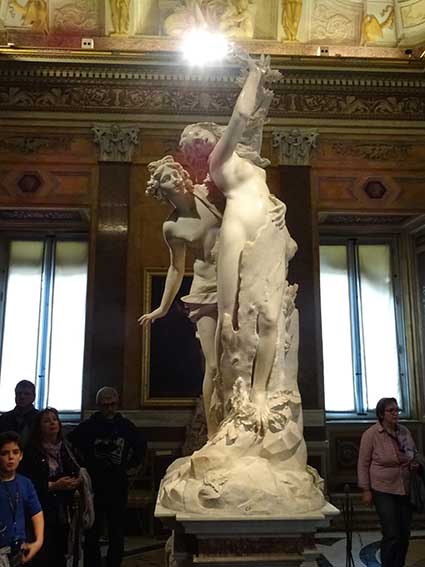 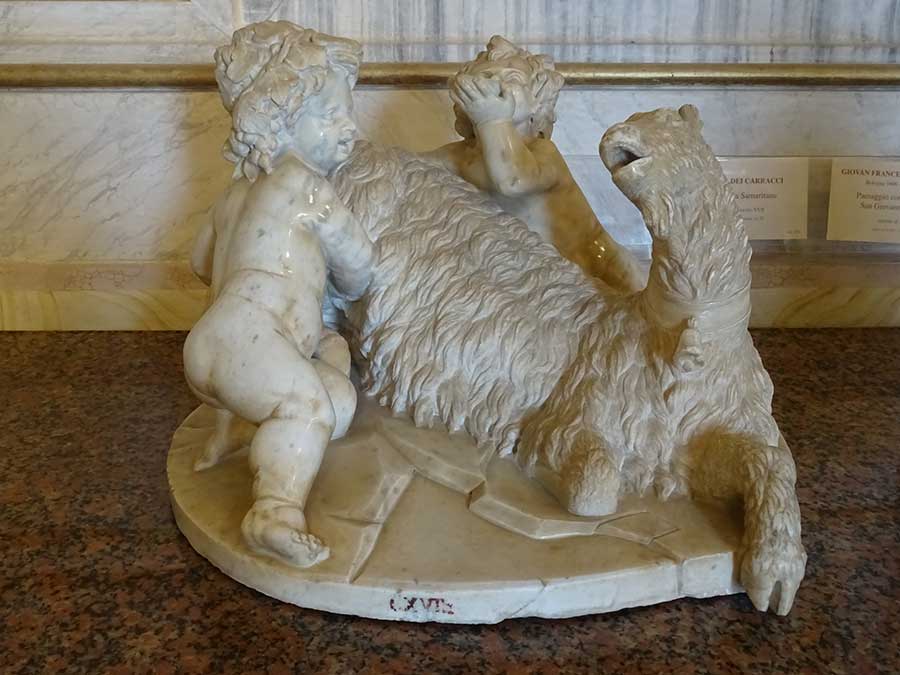 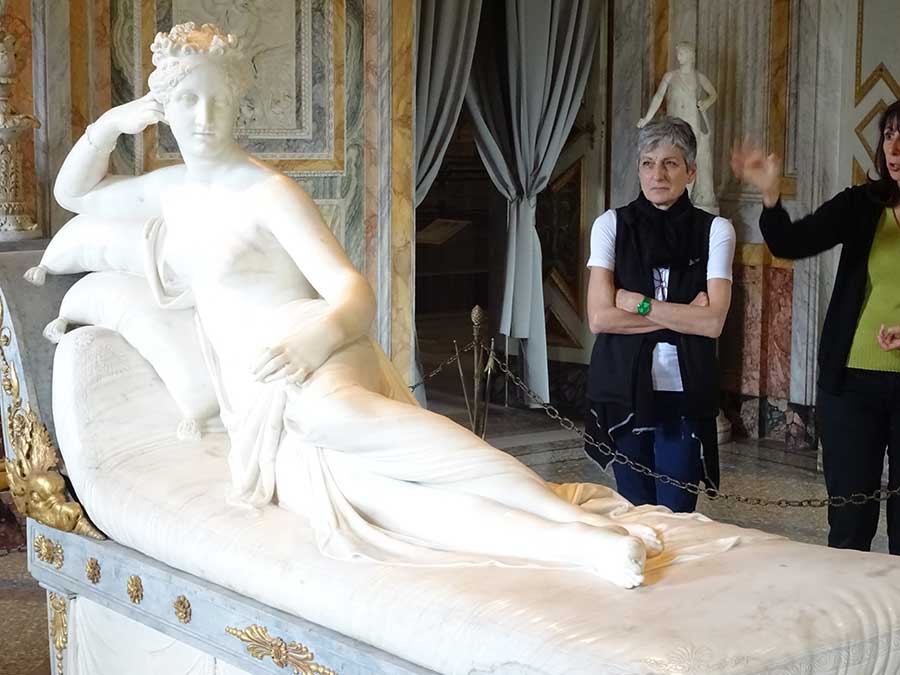 We also saw several paintings by Caravaggio, a rebel in his time (1572-1610 although those dates are still under debate), who was forgotton in his death and only really became recognised as a prominent artist in the 20th century. He dared to paint toddler Jesus completely naked, the Virgin Mary with cleavage and Saint Anne was painted in the image of a beggar at the time. Such scandal for a painting commissioned by the church! 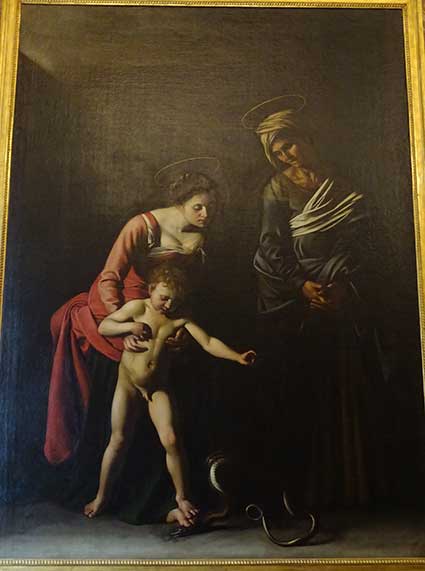 Our two hours being up, we went outside for a short 10 minute break. We then continued our tour, strolling through the Borghese Gardens. It was such a peaceful yet busy place. Think glorious gardens, almost woods in some parts, but about the size of Adelaide. Sort of like the ‘Central Park’ of Rome. On this glorious Sunday morning it was full of people strolling, walking their dogs, guitar players, and it really was an oasis in the middle of suburbia. At the end of our stroll we ended up in the Piazza del Popolo, or at least above it, which gave us an amazing view of Rome from above. From there, our tour ended, and we strolled back to our apartment (collecting lunch on the way) to take it easy for the rest of the day, in preparation for our planned day trip to Napoli, or Naples, tomorrow. Another early start!