One last tour of Bristol

A lack of planning on my part has meant that we had to make a choice; either see Harry Potter Studio Tour, or miss out on seeing London. I didn’t realise quite how far out of London it actually was, which meant it would basically be a seven hour day just to see it, and at this point that would mean missing out on seeing London. That said, we decided to give it a miss, instead having another day in Bristol and actually getting to have a pub lunch.

We started the morning late, with a delicious sample-size English breakfast. For a sample size, it was still a lot more than we normally would have eaten for breakfast but it was amazing. I had my first taste of black pudding (Rhi wouldn’t have a bar of it, though she ate the mushrooms I skipped). Whilst it didn’t taste particularly terrible, it’s certainly not something I’d be going out of my way to find once we get back home. More bacon is my preference ;) 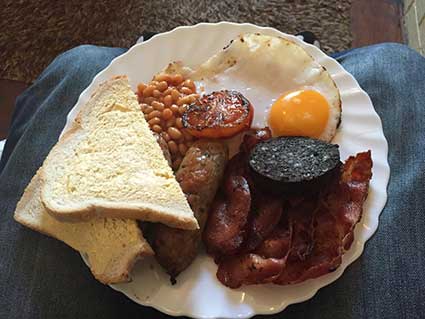 As we had been sleeping in, catching up from the flights over, we had been having late breakfasts and not really eating again until dinner time… sometimes we didn’t even have dinner. I was determined to have at least one pub lunch before leaving Bristol, so we set out for one last walk around Bristol and the weather was at it’s best for us. Our first stop was the Walkabout (Australian) pub for a quick drink. I can assure you all that it’s certainly nothing like any Aussie pub. Green and Gold paint on all the walls and awfully cliché slogans such as “no worries” on street signs stuck up on walls. The menu was far from Aussie; apart from the Vegemite there was a lot of American food on the menu. After Pete spilled a good portion of his Coopers Pale, we finished our drinks and headed on to our next stop. 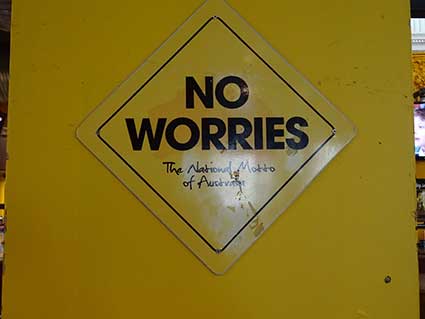 Is it really, though?

For lunch, we stopped at The Hatchett Inn, the watering hole once frequented by the notorious Bristol-born pirate Edward Teach (Blackbeard). These days it’s a metal bar - think Enigma. The menu was pretty impressive and it was hard to pick something. In the end I settled for a half rack of ribs and chips (traditional English pub food, I know), Rhi had sweet potato wedges and Pete the lamb chop and mash special. We all agreed that our meals were delicious. After finishing lunch and our drinks (Coke and New Zealand Cider), we set off to take in some more of Bristol’s sites. 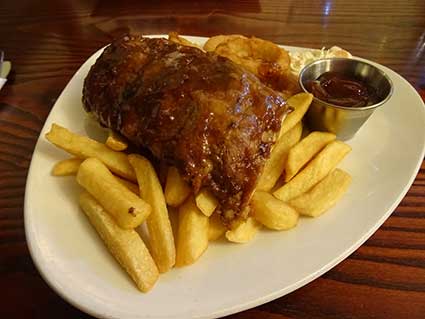 Bristol half rack with chips, onion rings, and slaw

Next we made our way to the Bristol Cathedral. Bristol doesn’t seem to do architecture by halves. Unfortunately, the images don’t really reflect the sheer size of these two buildings but the town hall (on the right) would be at least a couple of hundred metres from end to end.

We went inside the Cathedral and were blown away. The architecture inside places like this is always impressive and some of the detail of the stained glass windows was really amazing. It’s crazy when you think that some of this glass is hundreds of years older than Australia has been settled.

Between the cathedral and town hall is the Bristol library. We didn’t get a chance to go inside, but I’m reasonably certain that I would not have been disappointed.

From here, we went to millenium square. This large open space plays host to food festivals, sporting events and the like right on the waterfront of Bristol Floating Harbour. 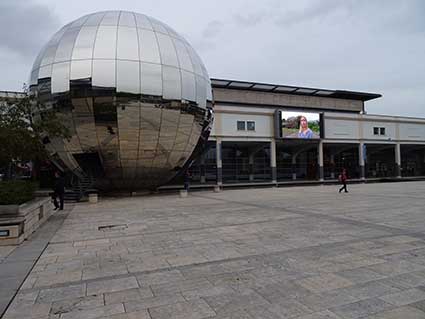 Mall's Balls, eat your heart out!

Docked on the Bristol Floating Harbour is The Matthew of Bristol, a replica of the ship that discovered North America in 1497. Opposite this is the Kaskelot, one of the largest remaining wooden ships in commission.

Our last stop for the evening was The Apple cider boat, where we met up with a few of Laura and Pete’s friends and enjoyed some Happy Daze cider. A lot of the (real) ciders in Bristol have a much higher alcohol content than the ones we have back home.

This isn’t the nasty, chemically rubbish. This is real cider, made from nothing but apples, natural and organic, well-balanced, craft-produced and as alcoholic drinks go pretty healthy!

If you ever get the chance, try Bristolian ciders; they’re some of the best I’ve ever had. While we’re on the topic of things you should try, I need to get a copy of Pete’s mac & cheese recipe. Hopefully I can do it justice at one of our barbeques when we get back home! 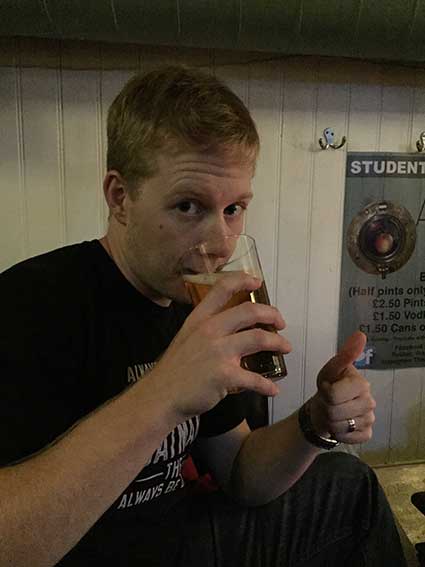