We woke up fairly early (well, early for a holiday!) as we wanted to have a stroll through Central Park before it got too hot and muggy. With the weather averaging around 30 degrees with 80% humidity, it’s been like walking through a sauna!

We were up, dressed and heading out the door by 7am. We walked down Broadway, and Central Park opened up before our eyes. It’s huge! Like, really huge! We only covered about 1/3 of it! We walked along the running track, then got ourselves lost in the Ramble in the middle. It was heating up quickly, but Central Park was so lovely and quiet in the middle of the hustle and bustle of New York.

We circled around the lake, stopping by Belvedere Castle, and headed past the Boathouse and Central Park Zoo, before we decided to head off and find some hydration (and, lets be real, airconditioning).

We took a stroll down Madison Avenue, looking at all of the shops that we would have to sell our first born to be able to afford anything in, before ducking into Starbucks (I know, shocker, right?).

We also noticed at this point that while New York may be “the city that never sleeps”, it is also the city of shops that don’t open until 10am. Perhaps because they are sleeping off having been awake all night?

As always, my trusty book stores saved us, and we stopped by a Barnes and Noble where I lusted and gazed wistfully at all of the books, before we made a few purchases and headed back to the hotel.

We regrouped, and decided that we would go to Madame Tussaud’s that afternoon, as it was only a 10 minute jaunt away.

After a 20 minute line up, we made our way through Madame Tussauds. Michael - having seen everyone else taking stock standard pictures with the wax figurines - decided to come up with some more original poses, much to my horror and amusement. Being the dutiful wife, I of course was on hand to capture the hilarity.

Once we got back out, we headed towards H&M as Michael had a yen for red mid-calf socks. What is it with this man and wanting things we cannot find? We’d already been into multiple stores, and thankfully in this instance we found some red socks with french fries on them, which we thought was pretty darn American.

After that, we headed back to the hotel. I have to say, whilst the hotel we’re staying at is a little on the pricey side, it’s been a blessing in terms of location. Being literally on the corner of Times Square it is pretty close to most things!

We took an afternoon nap, as we had a long evening ahead of us, seeing Wicked on Broadway! Our lovely, lovely friends had bought us tickets for our birthdays, and we were so excited.

Wicked. Was. Amazing. The lead playing Elphaba, Jennifer DiNoia, my god did she have a set of pipes! And the comedic timings of Glinda (Kara Lindsay) had us in absolute stitches. It was an amazing show, and we so throroughly enjoyed ourselves.

We strolled back to the hotel - even at 11pm at night, Times Square and the surrounding area was still hustling and bustling! Granted, it was a Friday night in summer so it probably shouldn’t have been surprising, but it’s a constant surprise to us small town folk how full of people New York is. I mean, New York City has a population of 8.5 million. South Australia as an entirety has about 1.7 million. It also explains why there seems to be construction happening pretty much everywhere we go - they’re constantly building up and out to accomodate people!

We got back up to our room, and crashed for the night.

This was probably our biggest day of sightseeing planned in New York, as the Statue of Liberty, World Trade Centre Memorial, and Brooklyn Bridge were all reasonably close to each other.

We started off our morning by walking around the city pointlessly for about half an hour - Michael seems to have lost his sense of directon, and I seem to have found mine, which is really bizarre. Michael wanted to find a Bank of America as we needed some more cash, and he took us in entirely the wrong direction, before he realised his error, and we spent the next 20 minutes walking around Rockefeller centre as the map told Michael there was a Bank there (there wasn’t, or at least not one that was visible).

In the end we gave up, and hailed a taxi to take us to Battery Park. While we had been walking everywhere, Battery Park was about 7km away, and given as it was another muggy scorcher, that wasn’t going to happen.

When we arrived, we lined up for our tickets. I have to say, getting a New York Pass has made things much easier, as it gets us into the major attractions fairly quickly and seamlessly. We then went through security, and boarded the ferry to take us to Liberty Island.

The ferry ride was very pleasant, with the breeze off the water giving us some much needed relief! Liberty Island itself was pretty busy - it would have been about 10:30am by this point, and there were many, many people there with us! We walked aorund the island, taking in Lady Liberty in all her glory and the skyline of Manhattan.

The Statue of Liberty was a gift from the French, and was placed in 1886. It was a welcoming beacon for many immigrants who came in via ship, who saw Lady Liberty and knew they had finally arrived in New York.

We were mighty parched, so we got some freshly made lemonade (not the fizzy kind, the lemon - water - sugar kind) and headed back to the ferry.

We decided to bypass Ellis Island, and rode the ferry all the way back to Battery Park. From there, we took a walk up Wall Street, and then across to the World Trade Centre Memorial.

The memorials were huge, and quite moving, with the names of each person lost engraved into plaques around two massive water fountains, one at the site of each tower that fell. While we, not being Americans, probably didn’t feel the impact as severely as American’s, we still remember where we were when the towers fell, and I for one certainly felt the gravity in that place.

While there, we met up with Jake, his wife Laura, and their adorable baby Harrison for lunch. We went to a local pizza joint which came highly recommended by a local, Big Al’s, and Michael enjoyed a “New York Slice” which he said was highly preferable over the Chicago style pizza.

From there we said goodbye, and Michael and I headed east to have a gander at the Brooklyn Bridge. While it is very impressive, the patriotic in me says that I do prefer the ol’ Sydney coathanger. I mean sure, the Brooklyn Bridge was built a good 50 years earlier, but whatever. 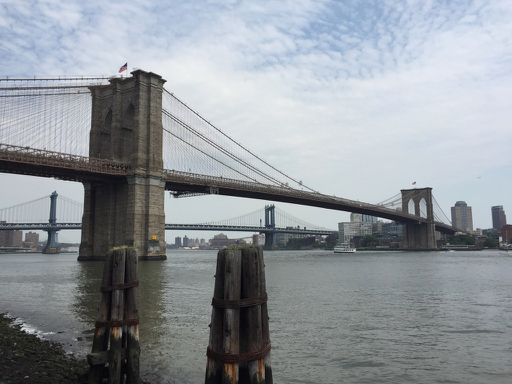 We caught a taxi back to Times Square, and spent a quiet evening in the hotel, resting our weary feet.

I was determined to see the top of the Empire State Building, so we headed off at about 10am. I have a real fear of heights and lifts, so this was a real challenge for me.

The Empire State Building was about 15 minutes walk away, so we hoofed it over and got our tickets (thanks again to the New York Pass).

The Empire State Building was built in 1931, and is entirely done up in Art Deco style. Think the Great Gatsby, very grand and beautiful. 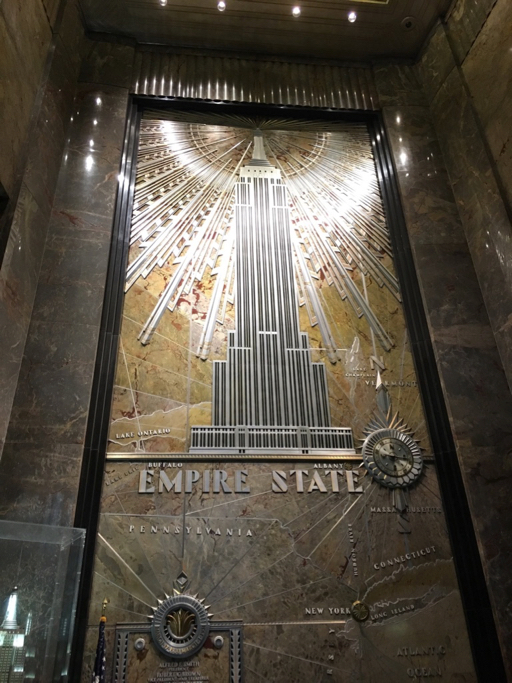 The initial lift goes up 80 floors in under a minute, but thankfully it was a fairly smooth ride. We then took the stairs for an extra 6 floors to get to the observation deck.

I have to say, despite not liking heights, the view was quite spectacular, provided I didn’t look straight down! We walked right around the deck, and finished with good timing, as it had just started to rain.

We headed back down (ugh ugh ugh) and headed outside. It had really started raining in ernest by this point, so we bought an umbrella and headed towards Macy’s.

Macy’s is huge! The building itself takes up an entire city block, and goes up 9 floors. We explored the first three or four, before heading out to meet Daniel for lunch.

We all headed to Shake Shack, which I think is a New York institution. They had gluten free hamburger buns and root beer (sarsparilla) so they are alright in my book! The food was actually really good, and I loved that they had dog treat options!

After that, Daniel headed off to meet some friends in Brooklyn, and we headed to Madison Square Garden. The New York Pass came in handy again, and we booked in for the 2pm backstage tour.

The current Madison Square Gardens was built in 1968, and went through a major ($1 billion!) makeover in 2011. Currently, it can accomodate up to 20,000 people, and many famous events have happened there, including Muhammad Ali vs Joe Frazer and Marilyn Monroe singing happy birthday to the president.

As we hadn’t really sat down in 5 hours we decided it was time to head back to the hotel for a rest. People had been arriving slowly for Laracon, so Michael decided to head out to meet Yaz and get some steak at “Quality Meats” while I rested my poor little tootsies and Watched Men in Black.