Monday was our last planned tourist day in New York, before I head off for two days of catching up with online friends and hanging out at Laracon US 2017.

First item on the agenda was to jump in a cab and head to the upper westside to check out Tom’s Restaurant. Neither of us were hungry, and the inside wasn’t ever used in filming of the show, so had no interest in going inside, but I got the token venue selfie. We jumped in another cab and headed back to Times Square.

Once back at Times Square, we decided to go for a stroll over to Grand Central Station and check that out. Our luck at visiting these kind of places is a bit low, given that the outside was being rennovated much like the Trevi Fountain was when we visited in Rome, so there wasn’t much to see there but inside the station is pretty impressive. Rhi didn’t know until too late, but there’s a pretty massive Apple Store in there, which I had to check out of course.

After Times Square, we decided to head over to Carlo’s Bakery before returning to our hotel. Of course, my navigation has been a bit off on this trip and I wasn’t helped much by Apple Maps, walking straight past the street we ought to have turned down and walking onwards a little bit before discovering the error. We turned around and headed back, luckily only overshooting by one block. I grabbed a lobster’s tail for Jake and a strawberry eclair for myself, before heading back a little disappointed that the Cake Boss was not present.

Before making it back to the hotel, we stopped off at Skechers where Rhi bought herself some light up shoes, which she’s been fawning over for quite some time but never been able to locate them. Turns out she fits into a kids 4.5 and could likely even fit a 4. No men’s sizes, though, so I missed out. 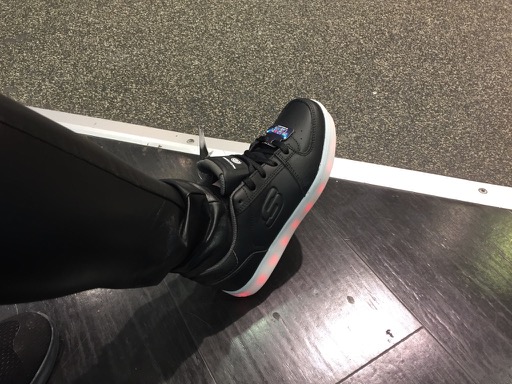 We returned to the hotel, before I head out again to catch up with some online friends for a few drinks on the evening of the conference. Good times were had, beer and buffalo wings were consumed, before I returned to meet Rhi and we head to the (much closer) AMC Empire 25 cinema to watch Valerian, spending some time together before I disappeared for two days. It’s not travelling well domestically from what I’ve been told, but both of us thoroughly enjoyed it. I felt like the story was a little underdeveloped and rushed, but it was an entertaining and visually impressive film. I won’t see it in the cinema again, but I certainly look forward to getting another look.

Today was the first day of Laracon US 2017, the main reason we’ve been on this trip for the past two weeks. The day started bright and early at 0545, so that I could meet a group of folks to go for a 5km run through Central Park. At this time of day it was a little cooler - particularly as Sunday had brought some storms and a cool change into New York - but a few minutes into the run sorted that problem out. I’d been keeping up regular running on the treadmill once in New York, so thankfully I didn’t die doing the run.

I head back to the hotel to shower and change, before meeting some folks in the hotel lobby and grabbing some Starbucks and walking over to the venue for registration. The venue looked fantastic and is basically entirely underground.

After live-tweeting the talks for part of the conference last year, I set out to do so again for the entire conference this year. Luckily I had as the live stream for the conference was suffering some first-day woes as it did last year, and my barrage of tweets were welcome by Laravel users the world over.

The day went by pretty quickly, with all of the talks on the first day being technical in nature and providing insight into some of the cool projects folks have been working on in the community, as well as some of the new framework features which had been teased by Taylor Otwell - the framework’s creator - for several months in the lead up to the conference.

At the conclusion of the day’s talks, there was an after party hosted at the venue, which was a good opportunity to socialise with everybody and talk about what we’d taken away from the speakers throughout the day. Rhi joined me and after the party, a group of us head out to find dinner. It’s surprisingly difficult to find somewhere that accommodates a group of 15 or so people in New York, but we managed to get there in the end.

It had been a long day, but we weren’t done yet, hanging out in the hotel bar with a few of the folks staying at the same hotel as us. We head up to our respective rooms around midnight and called it a (long) day.

I spent the day in bed, watching trashy tv and had a nap before getting ready and heading out to meet Michael. It was great!

I started the day on a decent amount of sleep, considering the late night yesterday as the conference talks didn’t start till 9.30.

Reaching the venue, the crowd was a little thinner on the second day, which you can easily attribute to the night before’s activities.

The second day of talks was largely softer - talks about approaches to marketing, building and shipping products, and so forth. The live stream was working flawlessly today, so the reception was a little quieter to the live tweets, but I perservered with it. Since my senior-level high school days, writing things down as I hear them has helped me to internalise and remember the content a lot better, so this was as much for my benefit as anybody else’s at this stage.

The day went by pretty quickly, and left me longing for a third day so as to be able to spend time with everybody. With 500 people in attendance, it’s hard to get out to everybody and learn from them. You have to really make a conscious effort to not spend too much time talking to the same people to get the most out of everybody’s presence.

The community really is what makes these things worthwhile, particularly when you factor in your ability to see the recorded talks again at a later time.

The after party was a little shorter today as the venue was hosting an evening performance of Avenue Q and they were not late with kicking us out. We took a smaller group with us via the hotel for dinner, settling on Justin Timberlake’s Southern Hospitality BBQ for dinner. Of course, we didn’t realise this until we were already seated and ordering, but he seems like a cool guy and the food did not disappoint. I had a black pepperbark brisket sandwich and Rhi had a classic cheddar cheeseburger with bacon (!!) and no bun as they didn’t do gluten free, along with a side of fried pickles. Dinner was pretty filling, so we skipped over dessert said goodbye to the folks that were still hanging around and headed back to our room so folks that had to head back to Jersey could get their stuff. We said our goodbyes, finished packing our bags for tomorrow’s departure, and turned in for the night.

I slept in until 1pm (!!!) and then headed out to buy some thicker socks for my new Skechers, stopping in at H&M, then looking through a few other stores on the way back to the hotel.

Michael messaged me to advise that TJ’s wife Laurel was getting in and needed somewhere to store her luggage until they went back to their hotel after dinner, so I met TJ and Laurel at the hotel and they came up to have a bit of a chat and drop off their unneeded things.

They headed off to Laracon, and I got ready and headed to meet Michael soon after.