The second of our three days at Orlando’s Disney World was to be split between Epcot and Hollywood Studios. We started our day nice and early and headed to Hollywood Studios, where we parked our car, took the tram to the entrance, then hopped aboard the ferry to Epcot.

We had been told by a few people that it’s fun to drink around the world at Epcot’s World Showcase, but being as we arrived at 9.30am a lot of the showcase was still closed. Just as well, it’s probably not ideal to start drinking that early in the day anyway.

My first order of the day was to grab a drink and what looked like a giant Balfour’s chocolate donut. The donut, sadly, turned out to be a poor imitation but it washed down nicely with the iced French vanilla coffee so wasn’t a total loss. 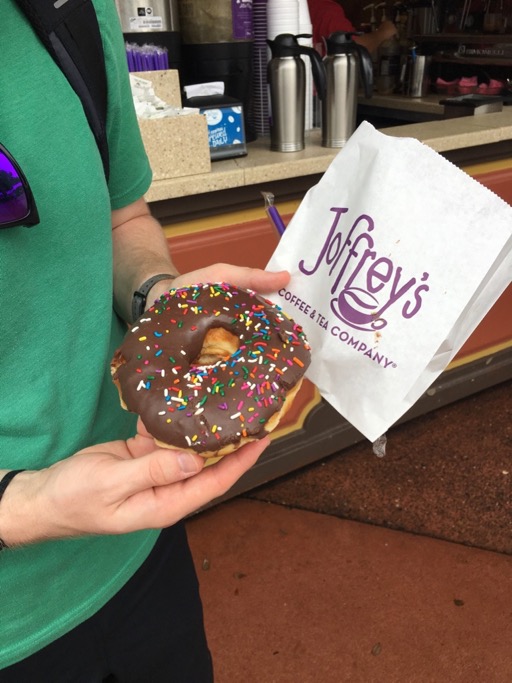 After covering half of the park without many other people, we reached Spaceship Earth in Future World and stopped for some requisite selfies. 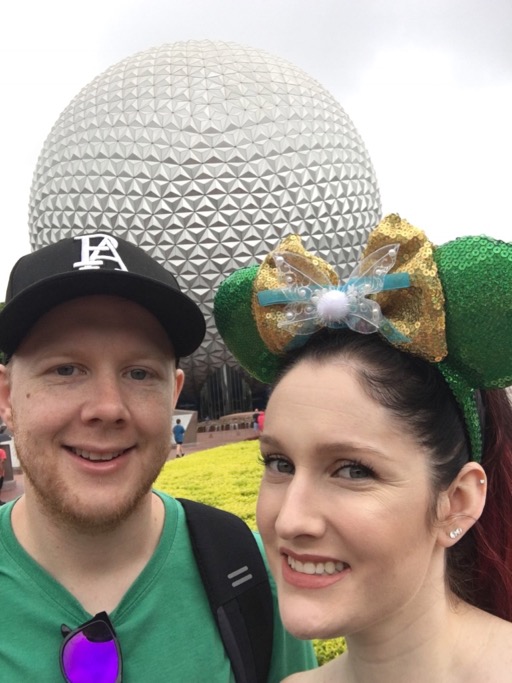 It was at this point that the rain started to fall, so we decided to take some refuge under Spaceship Earth, lining up for the attraction. We weaved into and out of the rain for about 15 minutes, before being safely beneath the main attraction for the remainder of our wait. Once inside, we set about travelling through time.

6/10 - “Much like Walt Disney’s Carousel of Progress, this attraction is in desperate need of an update”

Next, we made our way to the Disney & Pixar Short Film Festival where we got a bit of the history of Pixar and how they approach making films, before taking in a few of their short films. Starting first with a modern take on a classic Mickey Mouse cartoon “Get a Horse”, followed by “Piper”, and finished with “Feast”. 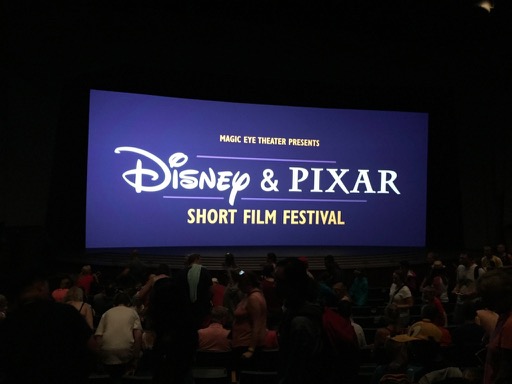 From this, we went right next door to Journey into imagination with Figment. Neither of us had heard of Figment, which we later learned was because this wasn’t a thing that existed outside of Epcot. We were, however, surprised to see that Eric Idle was the live-action part of this attraction.

4/10 - “Made for little kids, but not in such a way that it hides anything for adults”

Our first stop outside of Future World was Mexico, where we jumped on the first open - at this point - world stop in the Gran Fiesta Tour starring The Three Caballeros. This was a slow-moving boat ride through Mexico, where two amigos were looking for Donald Duck.

5/10 - “Again for kids without much for adults, but I don’t mind Donald Duck or the Mexican music”

With all the waiting for Spaceship Earth earlier in the day and the attractions that followed, we skipped through Norway, took in the sites of China and by the time we got to Germany, it was nearing lunchtime and given I hadn’t eaten since lunch yesterday, we popped into a Werther’s shop for some caramel popcorn and a bacon caramel square before stopping for some Bratwurst and Saueurkraut. The Bratwurst wasn’t the best, and being we were in America, it was presented as a hot dog, but my stomach was no longer rumbling, so we moved on. 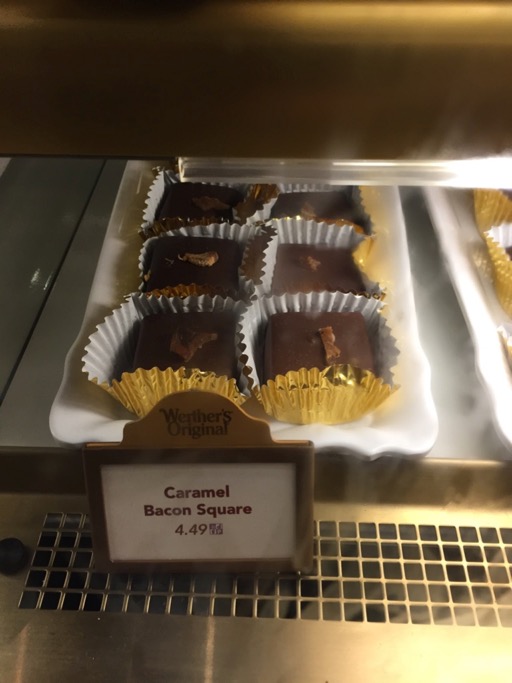 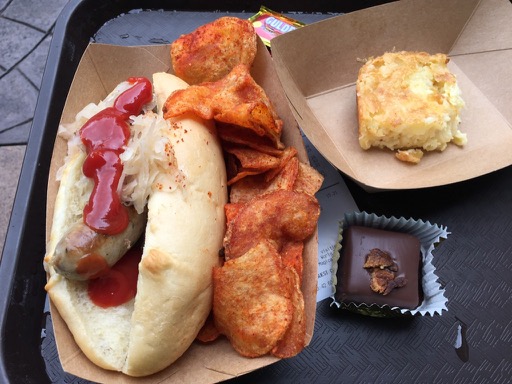 We had a poke around Italy, skipped by The American Adventure (come on, put Australia in there or something!), enjoyed the presentation of Japan and the smells of Morocco, before reaching France where we again stopped, this time for some ice cream (for me) and sorbet (for Rhi). I can highly recommend the artisanal flavours on offer. My apple crumble ice cream tasted just like the name suggests.

With ice cream in hand, we headed back to the boat ramp and awaited our ride back to Hollywood Studios.

Once back at Hollywood Studios, our first stop was Star Wars: Path of the Jedi, which was a 10-minute retelling of the Star Wars story, with a little sneak peek of the future. As a Star Wars fan, this wasn’t nearly long enough for me, but probably about 10 minutes too long for Rhi😬

The next stop was Star Tours, which I didn’t realise until after waiting 15 minutes or so to get inside that I had ridden this ride in California, at which point it was too late to turn back. Maybe it was different on the ride itself? If I’m honest, I don’t really remember if it was different or not, and it was Star Wars. 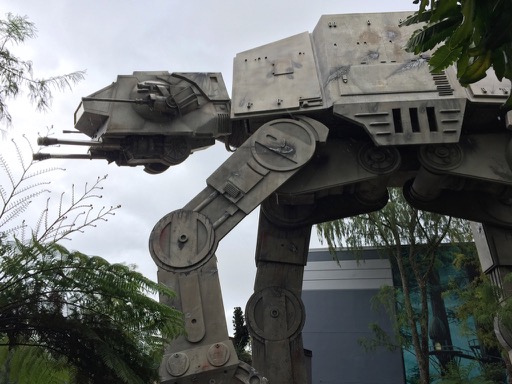 From here, our timing was just right to line up for the Indiana Jones Epic Stunt Spectacular. We took our seats, as directed, by moving from the far end of the theatre to the centre, where we were met by some feet on our seat of the people behind me. Turns out they were some potty-mouthed Polish folk, who started asking each other if any of them had gum. I was half a mind to offer them some to see their reaction, but figured I’d be stuck there for the next 40 minutes and decided against it.

I enjoyed the show, but it was cut short due to weather - the story of our time in Orlando, really - but not without getting to see a truck explode and be flipped over.

Next, we ducked over to the Star Wars Launch Bay Theater for a behind the scenes video to learn how a whole new generation of folks is crafting Star Wars, with focus on Rian Johnson’s upcoming Episode VIII. Upon exiting the the theatre, we got to cehck out a lot of cool figures from the Star Wars films.

If not the rain, then the Summer holidays cramped our style, with really long lines to pretty much everywhere. This meant that our best bet of actually seeing things was taking in a lot of the shows. In this case, we took our seats for The Music of Pixar Live - this was a 45 minute show that features a live orchestra playign the score to some memorable films such as Toy Story, Up, and The Incredibles. 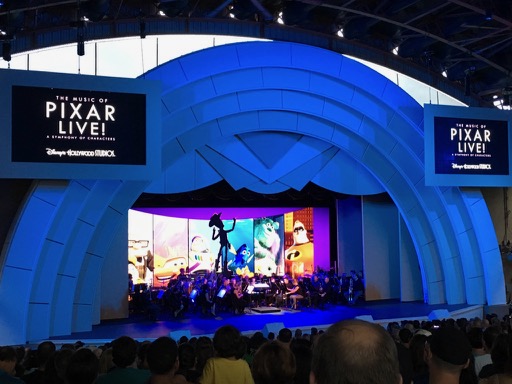 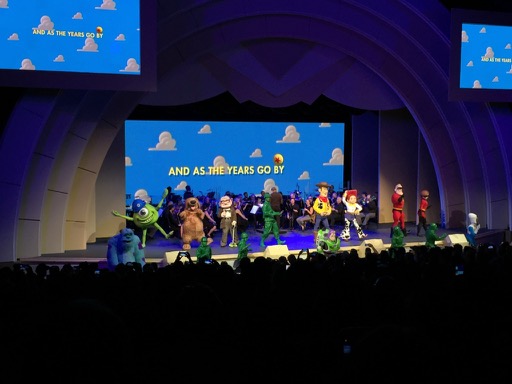 The Music of Pixar Live

From here, we were just about ready to take in the night performances. Unfortunately, the first at 9pm wasn’t going to finish in time for the second at 9.30pm and given that we were only going to be here one day, Rhi and I split up to each take in the one we’d enjoy best. For Rhi that was Fantasmic - a musical show with pyrotechnics and water projections (she got right up the front to get good video, and got saturated). For me, I went to see Star Wars: A Galactic Spectacular (I got a little wet because it was raining).

11/10 - “Even though I was caught in the rain, it was amazing to see scenes from all of the films brought to life, not only in projections, but also with pyrotechnics and lasers that extended the projections into the real world”