Today was designated as the day to explore the local area, finding food - which was definitely not difficult - and any sites worth checking out in greater detail later on. First off, however, we checked out Hollywood Boulevard and the walk of fame. This was a short (two block) walk from where we’re staying. 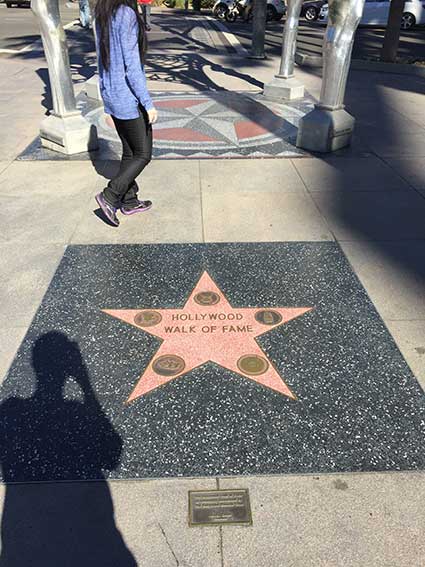 It was pretty cool to see the stars along the sidewalk and think about them all… well, the ones that I knew. It would have been handy if all of the stars were facing the same direction, though. Hollywood Boulevard really is an experience you need to make twice, as you spend most of the first time with your head down and tend to miss a lot of the other famous buildings on the walk. 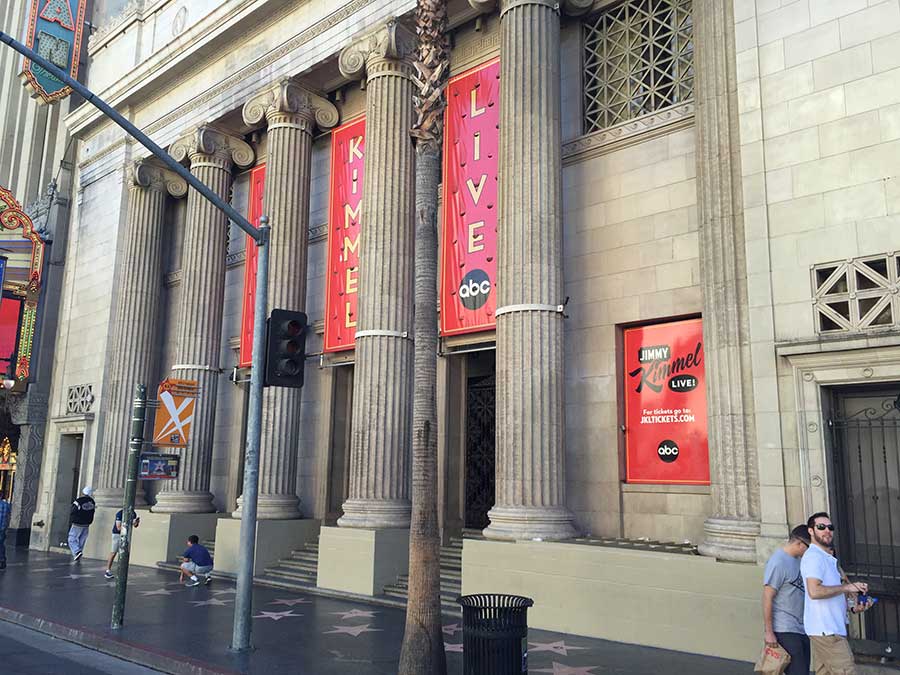 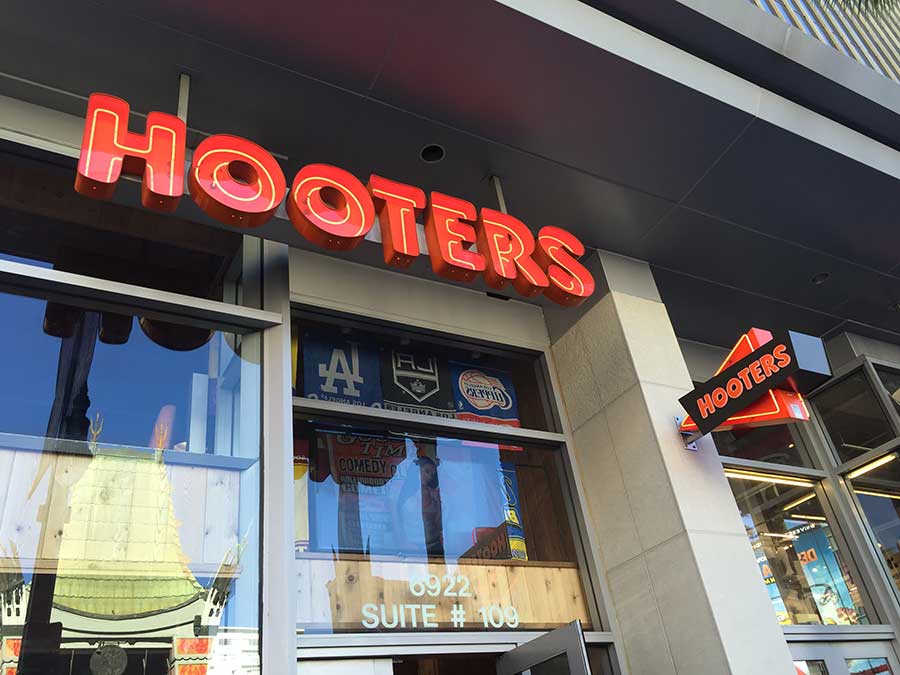 Rhi wouldn't let me go in for some reason

We were stunned by some really loud music, coming from a souvenir shop so did what any good tourist does; went inside. It was here I purchased the latest addition to my tshirt collection. 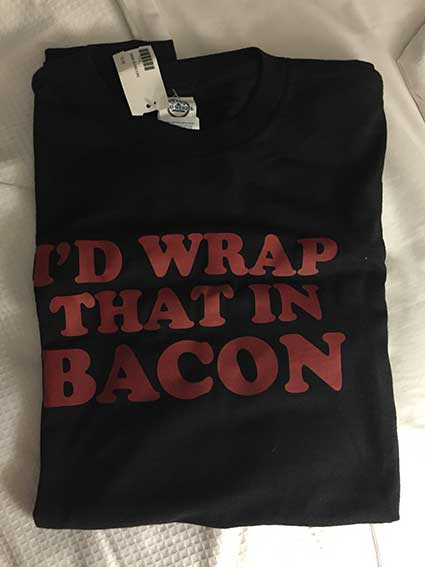 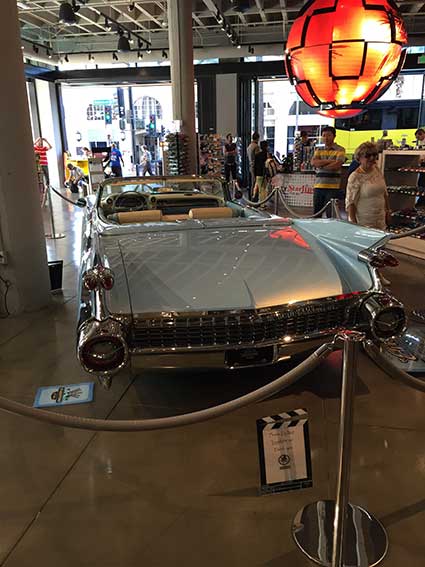 This was used by Elvis. I think.

Once outside the TCL Chinese Theater, we stopped to check out a few of the costumed characters walking the sidewalk and were approached by a hip hop artist handing out CDs (Unsigned Hype Vol. 1). He got excited when he found out that I was from Australia and started telling me about touring last year with the Big Day Out - high fives ensued. He then signed a copy of the CD, handed it to me, and started telling me that artists like him survive on donations. I told him I didn’t have any cash on me, and he said it’s fine even if it’s Australian. It must have been his lucky day, as I had a single five dollar note in my wallet. His face dropped a little, but he gave me a fist bump for my troubles. 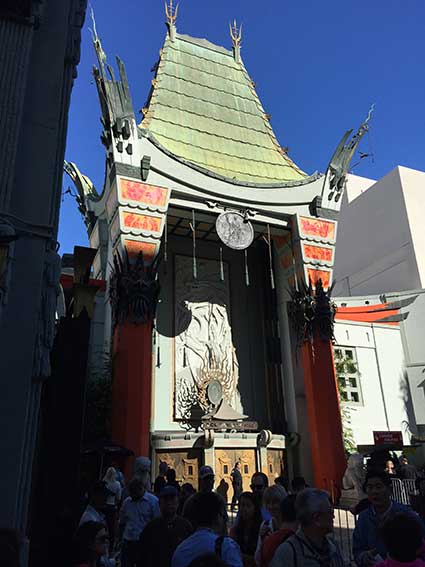 From Hollywood Boulevard, we headed back down North La Brea Avenue towards the shopping complex we passed on the way in last night to see what was there. Along the way, we passed “Ralphs” - a supermarket, which we decided we would return to on the way back to get some supplies for the week. Our first stop at West Hollywood Gateway was Target.

Target in the United States - at least this particular location - is not much like what we have back home. I mean, it has the clothes, homewares, and so on like back home but at the back of the store was a supermarket, so you can do your grocery shopping and pick up some new clothes at the same time. We grabbed some Yankee Candles. Rhi informed me that these are quite expensive back home, so we grabbed three for roughly the same price of what we would pay for one back home. They smelt pretty good.

After Target, we went into Best Buy. This place was pretty cool, it’s like JB HiFi on crack. I eyed off some new headphones to grab later in the week, as funds allowed, and purchased a Roku 3 and Roku Streaming Stick as these are too hard to get ones hands on in Australia.

On the way back to Ralph’s, we dropped in to T-Mobile to organise a SIM for me to use whilst in the States. As we’re driving everywhere, we actually need data to use maps reliably. A $10 SIM card and $20 worth of pay-as-you-go credit later and we were on our way to pick up some groceries. I could really get used to living in America, and if I had a solid diet of the stuff that I bought today, I probably wouldn’t be able to leave, either. Bacon jerky, which is delicious, Lay’s potato chips, soft drinks, chocolate, and a two-pack of ‘Perfect Bacon Bowl’. We also got some water, bananas, and apples and then realised we had to carry this stuff back to the hotel. 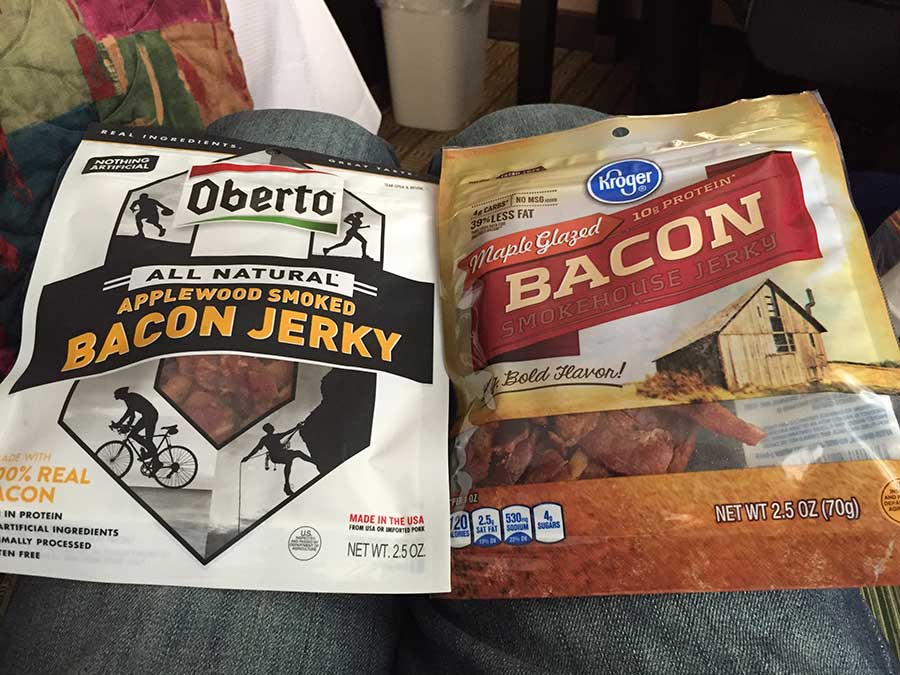 Once back at the hotel, I got in touch with Sam to catch up in the afternoon. Rhi wasn’t feeling too well and wanted to stay back to relax, but before I headed off, we went to locate a nail place so Rhi could get her nails done. Unfortunately, the first place didn’t do the type of nails wanted and the second place was closed. To make up for it, Rhi got a Pumpkin Spice Frappuccino from Starbucks, complete with her name incorrectly spelt. After getting Rhi back to the hotel, I made the trip out to Valencia where Sam was staying with his dad. 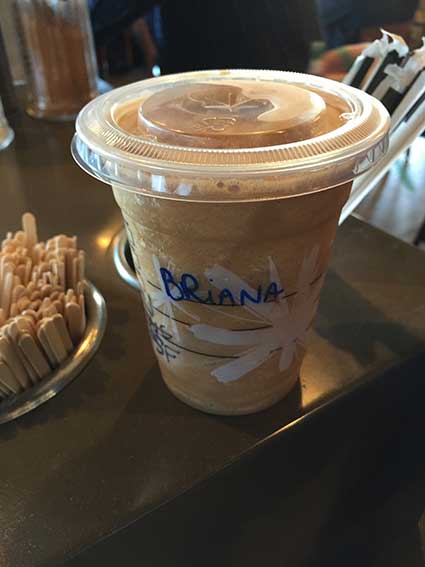 We went to BJ’s Restaurant & Brewhouse where we enjoyed deep-dish pizza, which Sam assured me was in fact pan and not deep-dish, and watched the Patriots game. Once the game was done, I dropped Sam and his dad off back at their hotel, at which point Sam asked if he could tag along with us to Universal Studios tomorrow, and headed back to Hollywood.