Universal Studios Day! It turned out I was to be approaching this day with bleary eyes, as it seems our bodies are still operating on European time, which means Michael got minimal sleep and I got even less. 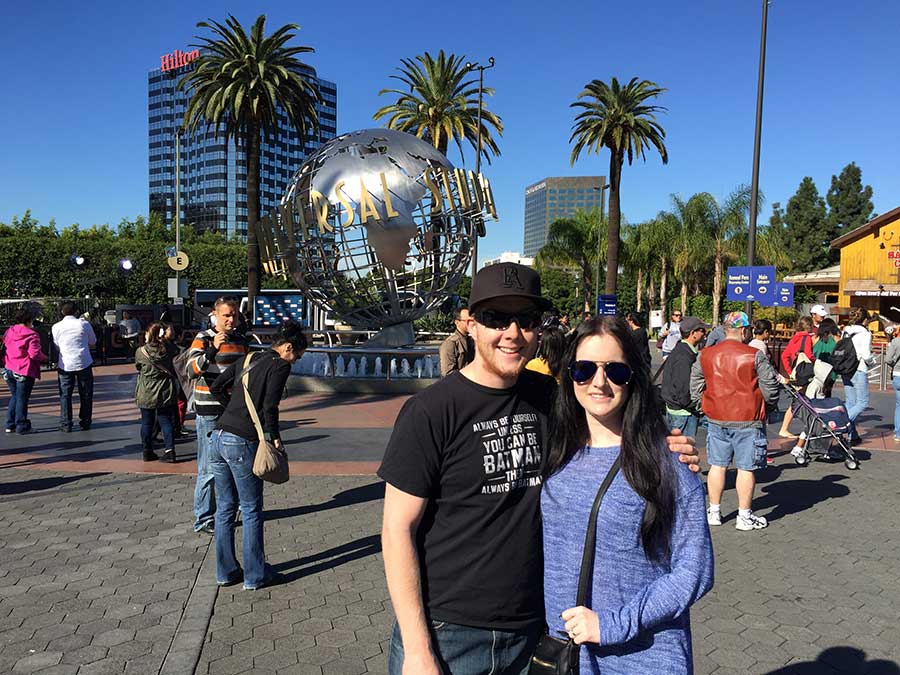 Us at Universal Studios, Hollywood

After breakfast, we hopped in the car and headed to Universal Studios, which is about 10-15mins from where we are staying. We parked in the carpark (Woody Woodpecker section) and headed off to meet with Sam, who had graciously agreed to accompany us for the day, which I was quite happy with, as it meant Michael would have someone to go on rides with!

At 10am the gates opened, and we headed on through with our Citypass, which gains us entry to both Universal and Disneyland. We helped Sam dump his backpack off at the lockers (it looked heavy) and on agreement, headed straight through the park to the Studio Tour. After hearing of Sam’s past experiences of waiting times for the Studio Tour, we were all pleasantly surprised to find we got on pretty much straight away. This turned out to be the theme of the day. The benefits of going in off season!

The studio tour was great, the little vehicle (truck? van? oversized golf cart?) started off with showing us sets from old movies, new televisions shows, and everything inbetween! Its amazing to see how these sets have been used in repeated movies over the years, and you wouldn’t notice it unless you knew. They had the skyscraper section, the wild west section, the European section, the New York section and the suburban section (previously home to Desperate Housewives, but we couldn’t go in there because they were redressing it for a new movie or something). We had to stay real quiet whilst passing one set, where they were filming a tv show at that time (Sam, it was called Home & Family. I’ve never heard of it either). We went into the King Kong 3D experience, which was really good, but a little scary with the cart jerking around and water being sprayed at you - you could certainly believe you were there! We bypassed cars from movies past, a pond from Jaws with a shark set up. We then went through a fully set up subway tunnel set which again was an experience, with an ‘earthquake’ being set off, cart jerking around, water spraying, fire, and a train crashing! 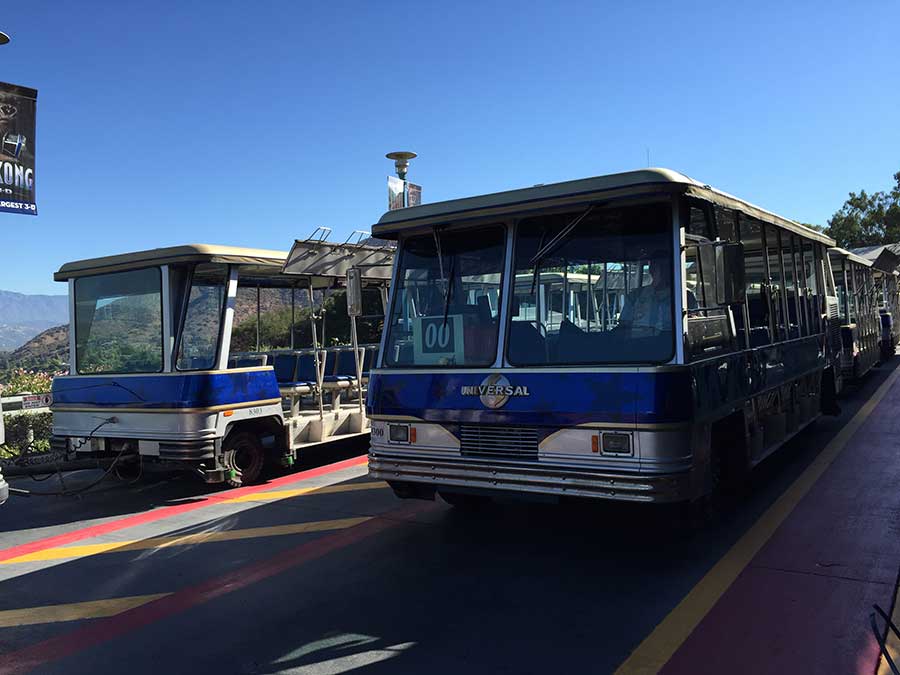 From there the studio tour wound up, and we headed to the lowest part of the park, which was down three exceedingly long escalators. There, I did a bit of shop browsing and sun baking while Sam and Michael went on the Jurassic Park, Transformers and Revenge of the Mummy rides. The Transformers ride apparently broke down half way through, so Sam and I waited while Michael attempted a second go through, and they were both given 2 Skip the Line passes, which came in handy later on. I was much amused by the Optimus Prime actor who was there to take photos with children and adults alike. This guy had the act down pat, but threw in some killer lines, including “Ah, I see you are using the intimidation tactic of wearing a t-shirt two sizes too small to make your muscles appear larger” to one poor man. I laughed, I’m not sure that he did. Sam got star stuck when he went to grab a bottle of water and came across Christopher Meloni, aka Detective Stabler from Law and Order, having lunch with his family. He debated getting a photo, but decided in the end to leave the man in peace. 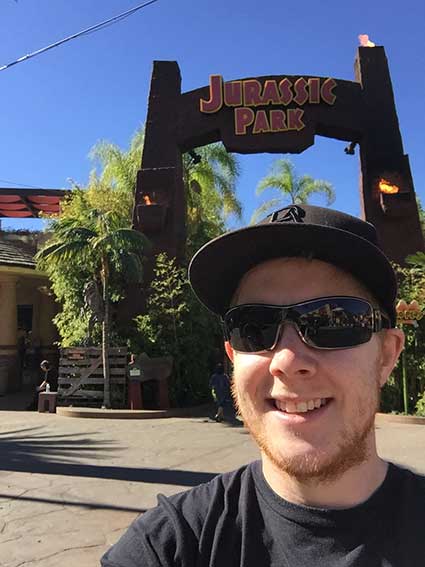 Michael in front of the Jurassic Park ride

Once the boys were done with the rides, we headed back up the escalators (stairs were an option but it would have been like climbing Mount Lofty I swear) and explored the upper section. We browsed through the Kwik-E-Mart store, had a look in the kiddies section of the park, and peruse a candy shop which had many weird, wonderful and vaguely threatening varieties of chocolate and candy, including candy cigarettes which I have not seen since I was about 8!

We then decided to grab some lunch before heading to the Waterworld show. We “used” our Front of the Line passes to get in, although they never took them from us. The Waterworld show was amazing, the actors performing amazing jet ski rides and 47 foot drops into water. We found out at the end that all of the actors were from various TV shows and such, Grimm, Agents of Shield etc, and wondered if it was part of their interviews and initial contracts when signing on actors for new shows that they be able to perform death defying stunts and/or have professional jet ski skills so that they could rotate them through the park on their off days. After the show finished, our Front of the Line passes enabled us to hang around for a bit of a behind the scenes with two of the actors, who explained how some of the tricks worked, and were happy to answer questions. 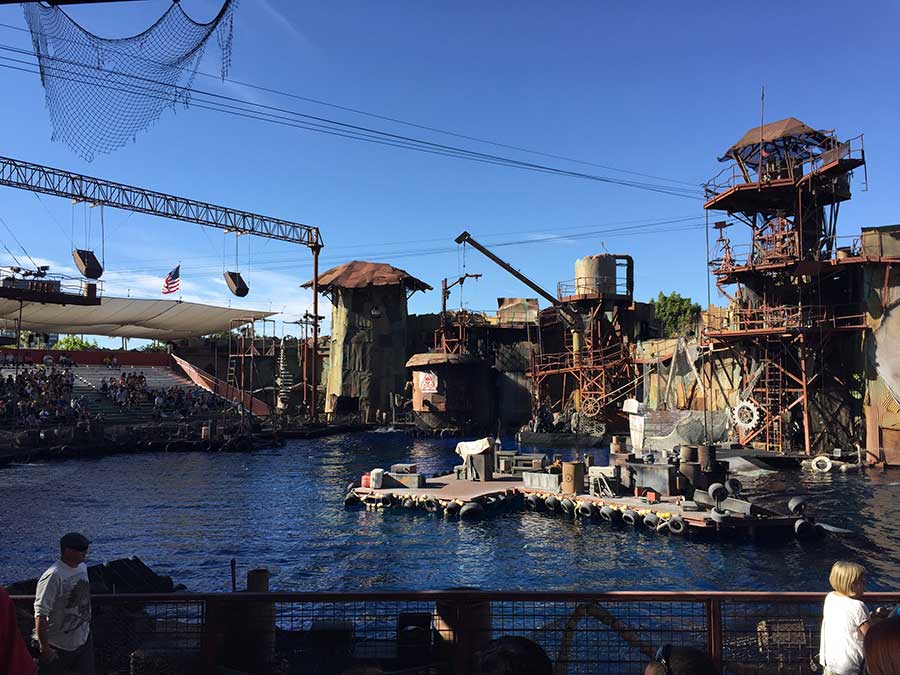 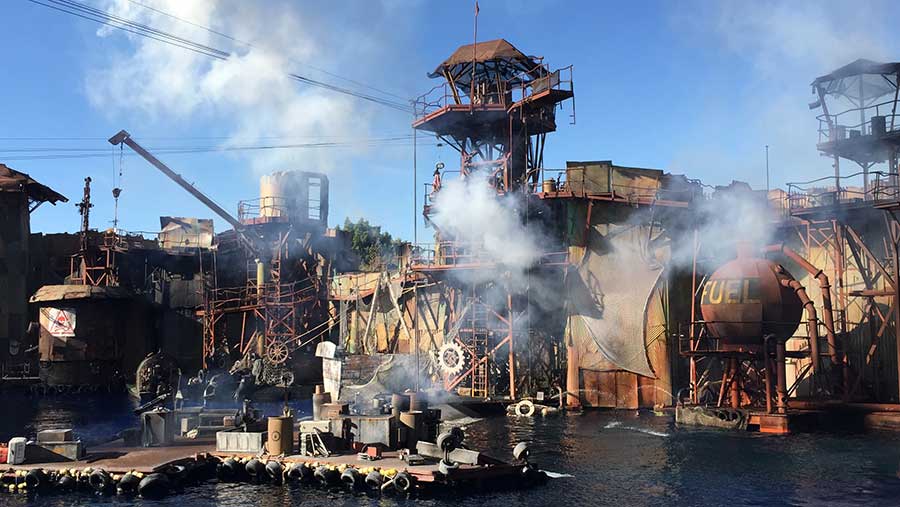 When that was over, we scurried over to the Special Effects Stage, to watch how some special effects were made in the past, and now with technology. Michael tried to yell out a joke half way through which was horrendously embarrassing. Way to misrepresent Australia, geez. That aside, it was interesting to see some tricks of the trade in action.

After that was finished, we collected Sam’s backpack from the lockers, and took a stroll through the Citywalk and the myriad of shops there. Michael and I finally decided on a souvenir from our time in LA (they were all horrendously tacky, but what can you do) and then decided to lure Sam back to our hotel room. Okay not really, his friend that he was going to have dinner and a movie with later on wasn’t going to get off work for another two hours, so we invited him over to watch terrible television with a minimum of luring or funny business.

We got back to the hotel, and in an effort to keep us all awake we went next door to In N Out burger for dinner. The place was packed (it always seems to be packed) but we were served fairly quickly, and had some tasty burgers. We had great conversation (Abbott, still a dickhead halfway across the world) and then headed back to the hotel. Sam was picked up shortly after, and Michael and I watched television until we both conked out. 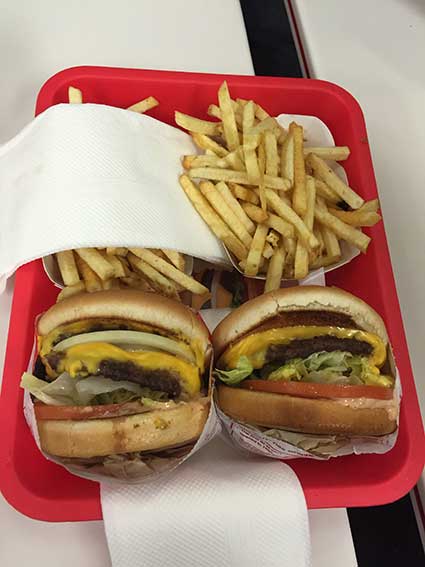 In n Out Burger

In true crossover blog style, you can find Sam’s accounting of the day over at Sam’s Travel Junket - where he is documenting his 5 months abroad gallivanting around America and Europe.