The happiest place on earth in just six hours

Today our destination was Disneyland, the happiest place on earth! We headed off early so that we could be there on opening, at 10am. First, we scouted out the gift shop and what we would buy on our exit (we got a few things then but didn’t want to lug around too much all day!) and then entered the park using our Citypass.

#1 priority on entry was finding sunscreen! Luckily, the stall by the entrance sold some, so we coated ourselves like the pasty white people that we are. The weather was quite warm, high twenties to early thirties, so there was no way I could get away with long sleeves like I had for the rest of our trip.

After walking through the intial street of shops, we laid eyes upon the famous castle! I have to say, its so much smaller than I thought it would be. Photos always seem to make it so much bigger! We passed through, and had a look through Fantasyland. There was a giant carousel, and the Bibbidi Bobbidi Boutique, where little girls can be made up to look like their favourite princess - no doubt at a high cost. I’m pretty sure that they had nothing in my size. The theme of the day seemed to be Frozen - many little Elsa’s and Anna’s running around - although really, is anyone surprised by that? I didn’t think so. 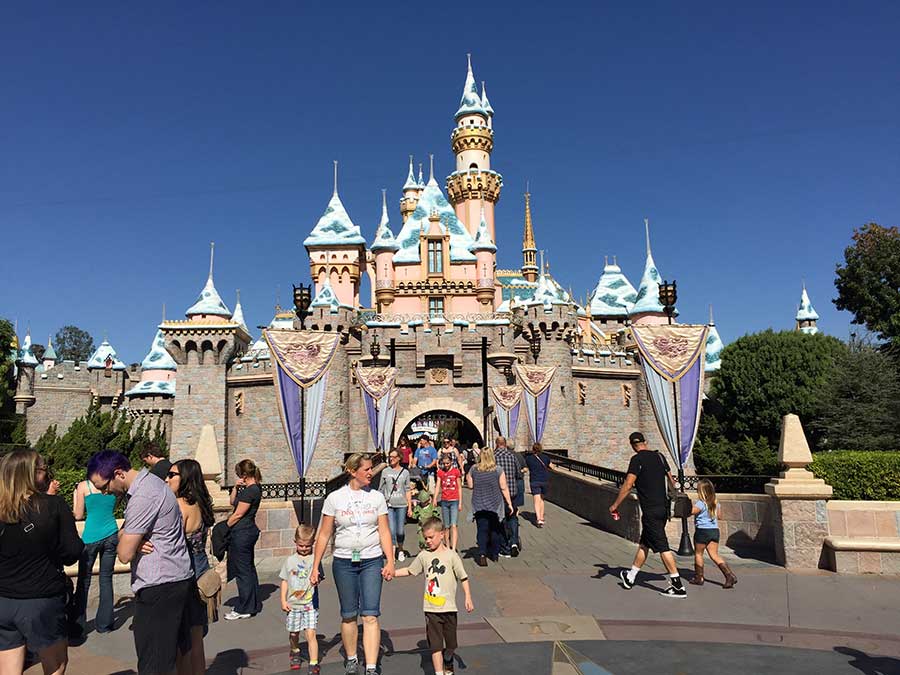 We passed through into Frontierland, the wild west section, where Michael hit up his first ride of the day, Big Thunder Mountain Railroad.

Michael’s rating: Three stars out of five. “It was mer. It didn’t make me scream. Very kid friendly”

Then it was straight onto the Pirates of the Caribbean ride.

Inside the Pirates of the Caribbean

Michael’s rating: Three stars out of five. “It wasn’t a ride as such, it was more an experience”

From there we wandered though New Orleans Square, which was super pretty, all decorated like a cross between Mardi Gras and Christmas. Michael then went on, or in, Haunted Mansion Holiday. 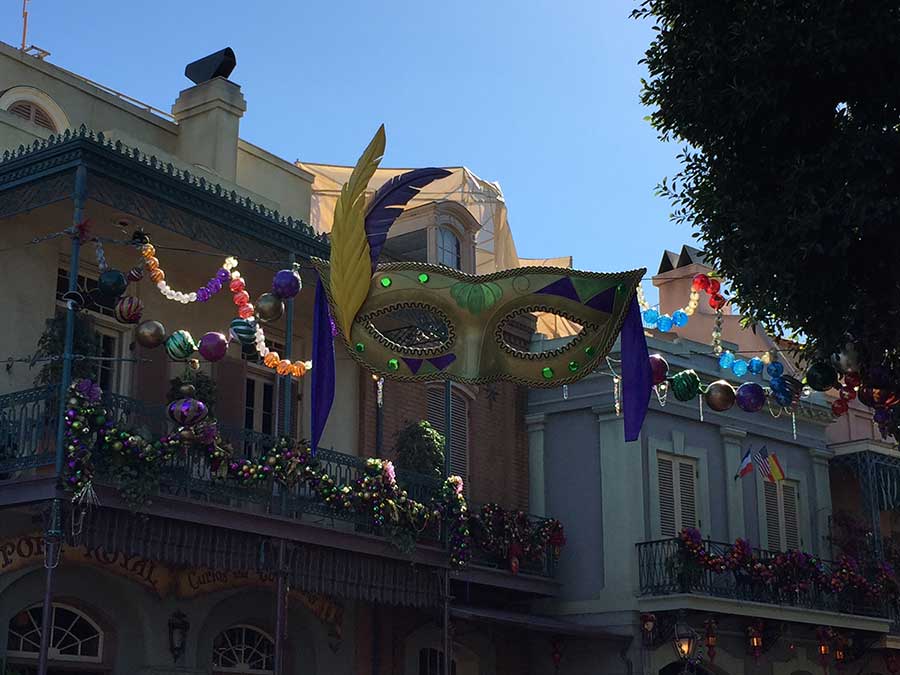 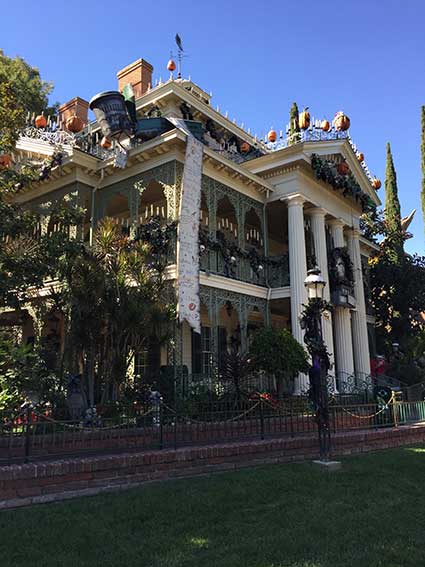 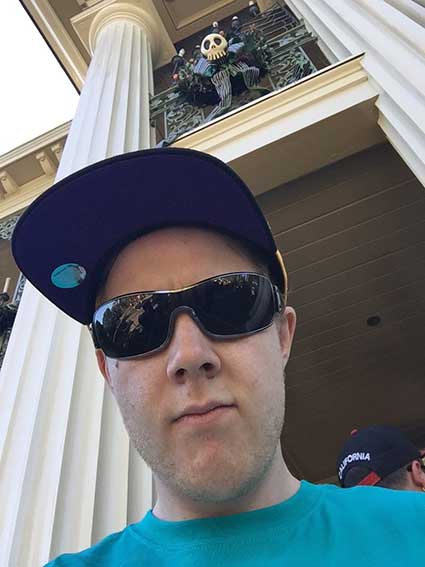 Michael outside the Haunted Mansion

Michael’s rating: Three stars out of five. “It was cool effects wise, but not scary”

We then went around the corner into Critter County, where Michael hopped onto Splash Mountain. 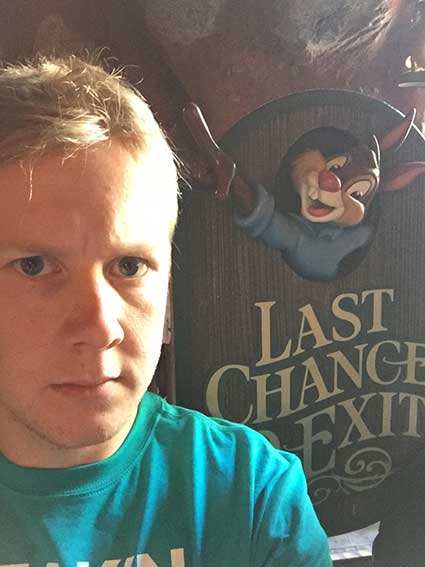 Michael’s rating: Four stars out of five. “I got completely wet down one side of my body, and there was only really a couple of drops, most of it was very mellow. However, I remembered losing my hat last time I went on the ride so remembered to take it off first this time” 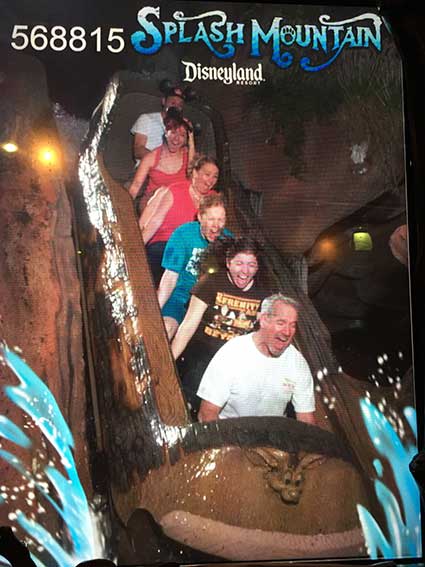 "At least I didn't lose my hat"

We passed back through New Orleans Square to get into Adventureland, where Michael got on the Indiana Jones Adventure ride.

Michael’s rating: Four stars out of five. “It was more exciting, the ride was quicker and bumpier. There was nothing scream-inducing, I don’t know what everyone else was screaming about”

And then Michael got his picture taken with Aladdin, Jasmine and the Genie. We headed across the centre of the park and headed into Tomorrowland and into the Innoventions exhibit, where we saw all of the Ironman suits (cool!) and met Captain America (he had the bluest eyes….). 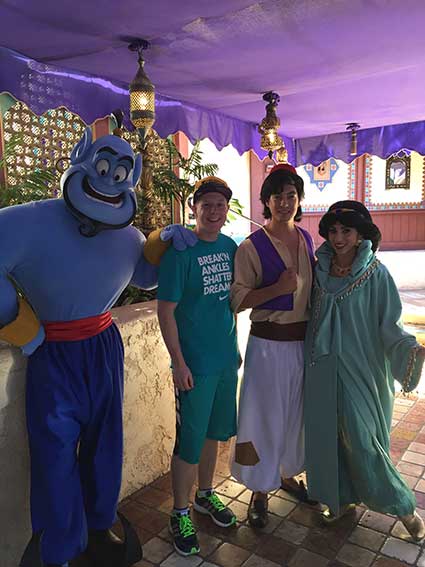 Michael with the Aladdin characters 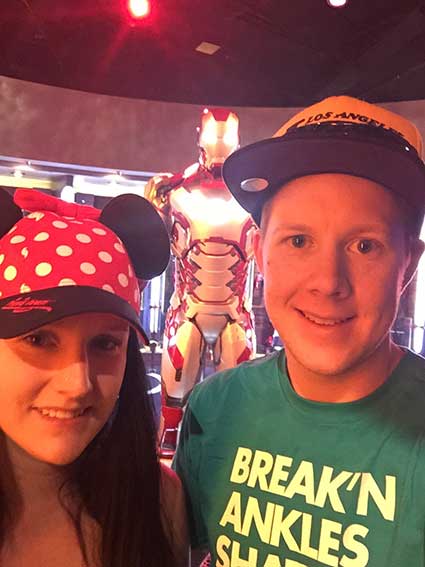 Us in front of the Iron Man suit

Us with Captain America 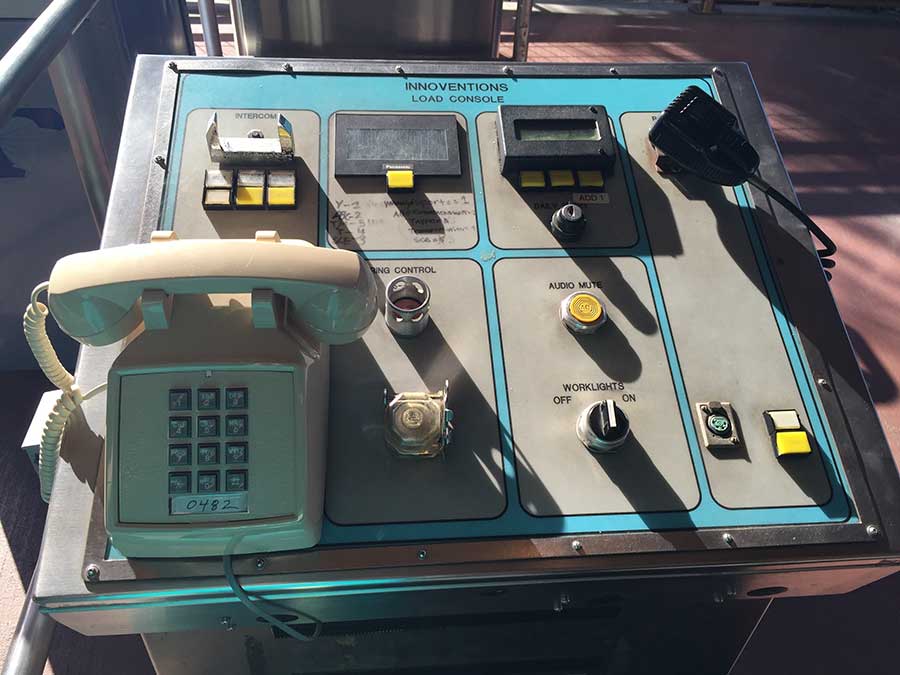 A bit out of date

By this time Michael was feeling a little peckish, so we sat down at Redd Rocket’s Pizza Port - where we had an eagle eye view of the Jedi Training show. Little kids are adorable.

We then had a look at the map, and realised the one part we hadn’t really seen yet was Mickey’s Toontown, up the top of the park. We had a quick scout around, but this section was more oriented to the youngin’s than anything else.

We wandered back through Frontierland, and then Michael realised he hadn’t been on the Star Tours ride yet, so back to Tomorrowland we went. 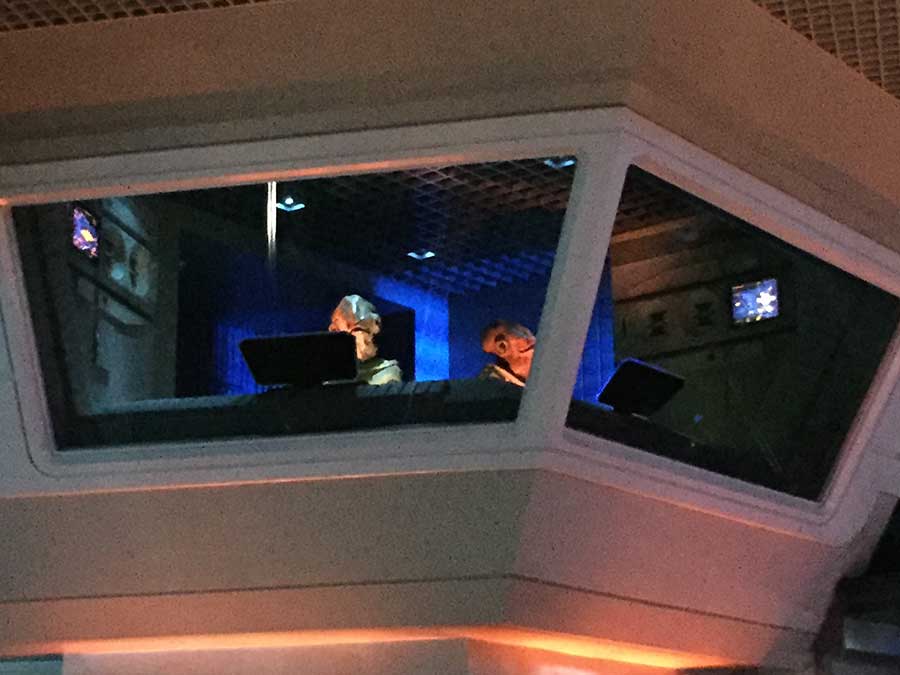 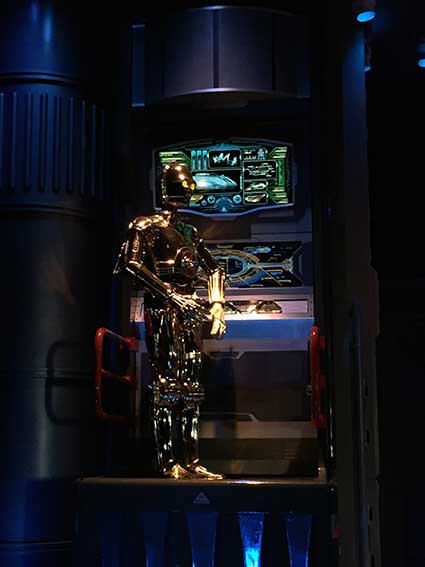 Michael’s rating: Three starts out of five. “Pretty good. C3PO was the captain of an out of control star tour ship. Lots of sudden movement and cool to be part of the Star Wars universe. I was expecting more force when going into ‘light speed’. Not sure what everyone else was screaming for.”

It was about 4pm and we realised we were pretty much done. We had originally planned to do a day at Disneyland, split the next day between Disneyland and Disney’s Californian Adventure and the last day at Disney’s Californian Adventure, but realising that we didn’t really have anything else to do, we decided to leave tomorrow to a packing, last bits and bobs, trip to Santa Monica day.

Michael was really keen to stay around for the fireworks, but a) I wasn’t keen to hang around for 3 hours with nothing to do and b) I’d noticed on the programme that they only had fireworks on Saturdays and Sundays now - not that he believed me. A security guard soon confirmed that I was right, so we headed off to get the car and to get dinner at a place that Michael had eaten at 10 years ago when he visited with his family. 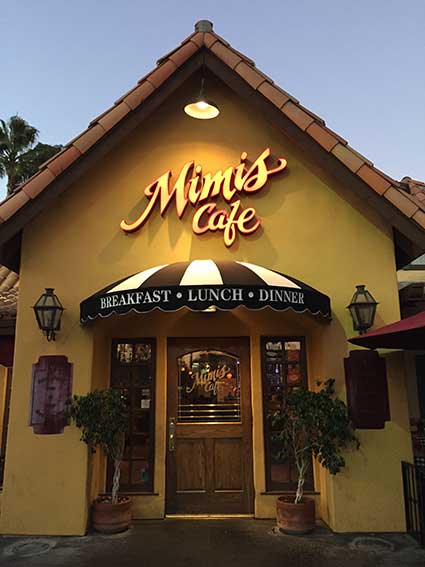 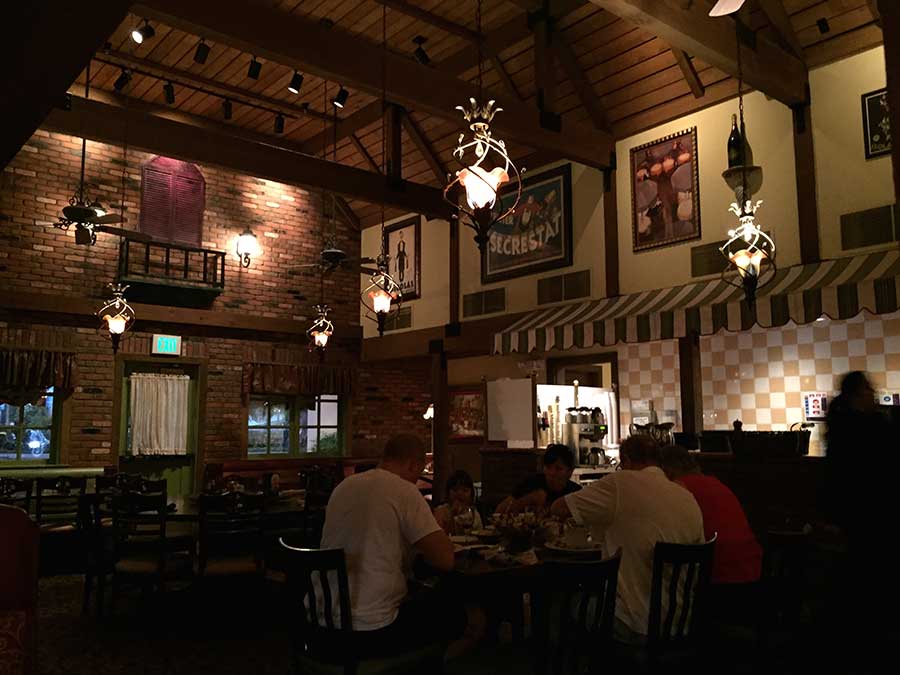 Once dinner was done, we headed back on the freeway towards Hollywood. The traffic in the morning hadn’t been too bad, but it was pretty bad on the way home, bumper to bumper for much of the freeway, although to be honest that suited me just fine, the slower we went, the less anxious I was.

We got home about 7:30pm, and flopped into bed. I think my conclusion about Disneyland is that it was cool, but would be way more interesting if either you were a kid or you had kids. Although, I could be wrong because I heard one parent pushing a pram passed us say “This would be so much better if we didn’t have a baby”. I did get a Chip mug though so I’m a happy camper!