The last day of our honeymoon is upon us at last. It all seems to have gone by so quickly, but we’ve made so many new memories, most of them good, some of them a bit scary (remember that crazy Parisian “taxi” we took?).

We started the day at 7am, which I thought was to give Rhi time to get ready, make sure we had everything, and get out of our room. I later discovered this was because the Disney parks opened at 9am instead of 10am on Friday - Sunday, which Rhi had advised me of previously and prepared for, but I had forgotten. Oops! Rhi was again not feeling hungry for breakfast, so I head downstairs for one last French roast coffee, with juice and toast, before printing out our additional baggage confirmation. I head upstairs to collect Rhi and our suitcases, before making a final sweep of the room to make sure we hadn’t left anything behind.

After checking out and getting all of our baggage into the car, we set off for Anaheim. Have I mentioned LA’s traffic? I think rush hour is more or less any time we were on the road. I must have missed an exit somewhere because Google Maps took us on a few freeways we didn’t go on on Wednesday’s trip to Disneyland. We pulled into the carpark and like seasoned Disneyland visitors, head down to the tram and onwards to Disney’s California Adventure.

From the entrance, I could tell that this was more of a ‘grown up’ park than what Disneyland was, which was fine by me! We stopped into a few of the souvenir shops making one last attempt to find one of the items Rhi was after with no luck. Our first stop was Monsters, Inc. Mike & Sully to the Rescue! - the only ride that Rhi took part in at the three parks we visited. It was, of course, for the littlies, but Rhi said that it was a bit jerky in parts for her. Three stars (for child content). The animatronic characters were very well done.

The ride that stood out from when we entered, towering over most of the other buildings was The Twilight Zone Tower of Terror, our next stop. Whilst not particularly frightening, the feeling in my stomach as the elevator went up and down, with sudden drops, and the ability to make my stomach seemingly float was great. Four stars! 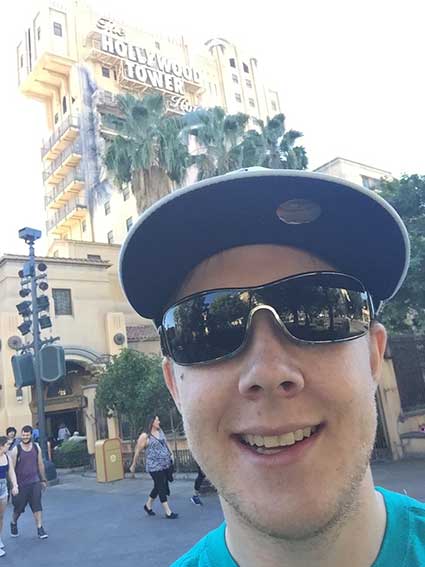 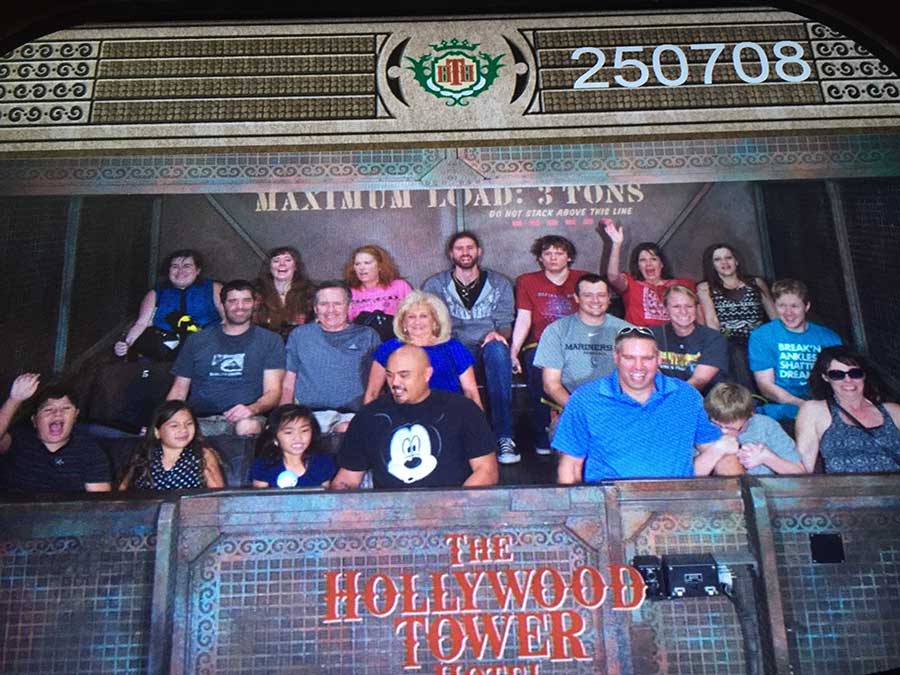 From here we went back to Hollywood Land to see the Aladdin Musical. Once there, we were disappointed to find the first show of the day had been cancelled. We then set off to Cars Land where I went on Radiator Springs Racers. The line up for this ride was 65 minutes but, given that Rhi has no intention of going on any rides, I was able to use the single rider line and got on a car in about 15 minutes. This ride had a bit of speed to it, but the most impressive thing for me was the animatronic cars in the first part of the ride. The way they spoke and their eyes worked was really impressive. Four stars! 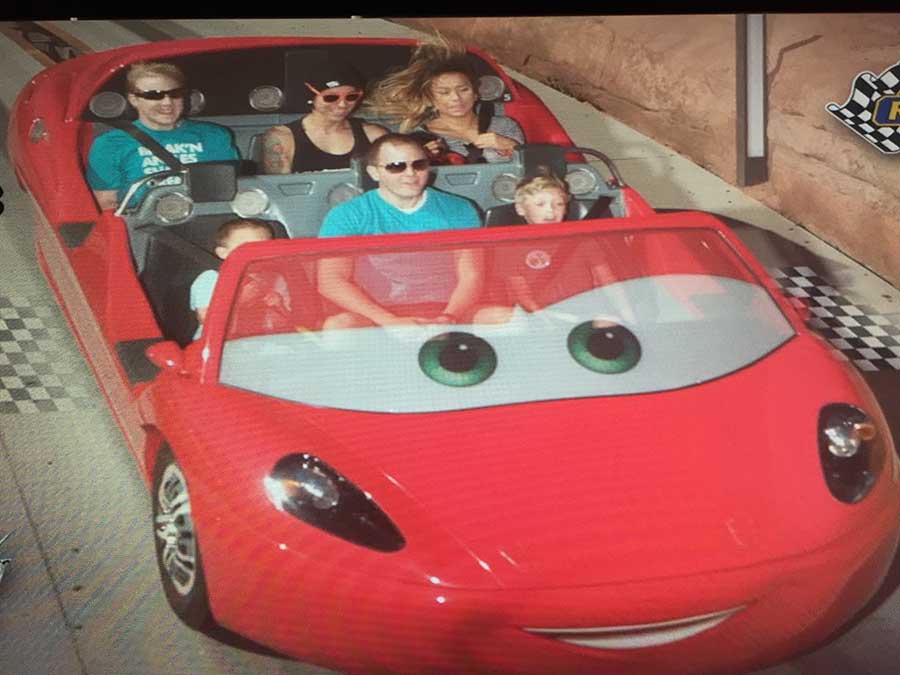 We then strolled to Paradise Pier for California Screamin’. This is likely the most grown-up ride in the park, at least from my experience. Again, the single rider line was my best friend, getting me onto the ride almost straight away and right at the front. High speed, twisting and turning, and a loop de loop for a close second favourite for me today. Four stars! 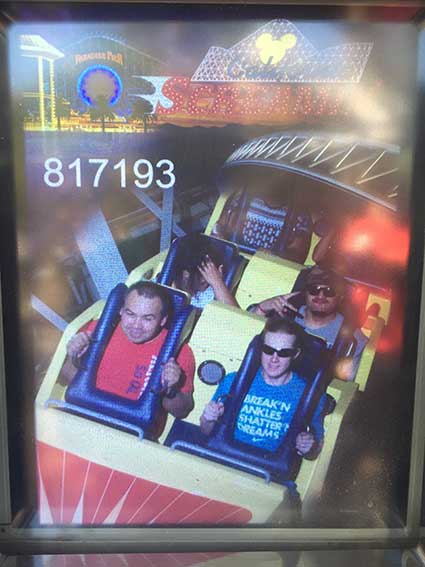 Next up was Grizzly Peak for the Grizzly River Run. Whilst it was no New Zealand whitewater rafting experience in terms of intensity, I was pleased to see that one of the ladies on the ride with me lost her hat. At least I’m not the only one to have ever lost an item of clothing on a ride. I didn’t get particularly wet - enough to have soggy shoes and cool down a little. Three stars.

At this point, Rhi let me know she wasn’t feeling well and really tired. We sat for a little while, before she decided that she would head back to the car to try and have a nap. I walked with her for a while, before parting ways to go on the Soarin’ Over California ride. This was by far my favourite ride for the day. Feet dangling 45 feet above the ground, suspended in front of an 80 foot spherical projection screen as I was transported over many of the great regions of California; San Diego, San Francisco, Napa Valley, Yosemite National Park, Lake Tahoe, and more, before finishing amidst the fireworks over Disneyland Park. It wasn’t quite the same as the real fireworks experience, but it was pretty close. Five stars. Check it out when you can!

From here, I head back to Hollywood Land and luckily, the Aladdin musical show was going ahead for it’s 2.20pm show. This was a great show, somewhere between the original movie and (I presume) the stage musical. The actor playing the genie threw in his own spin on the character, adding in some pop culture references, Gangnam Dancing and making it his own, whilst staying true to the original character. The cast was pretty good, with Jaffar being the closest to the original character in my opinion. Three and a half stars, but only for brevity (the show was about 45 minutes). 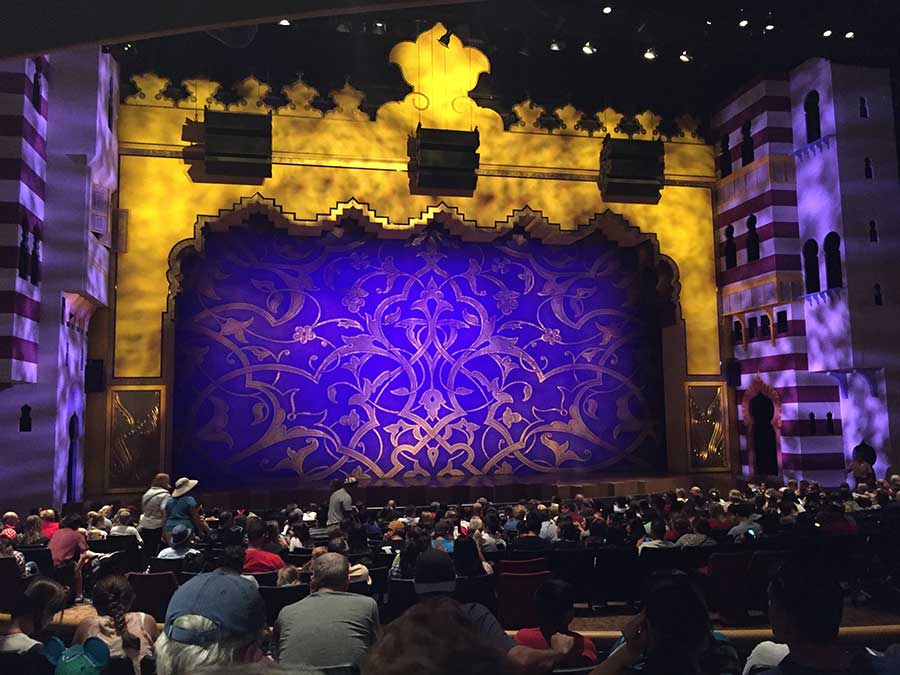 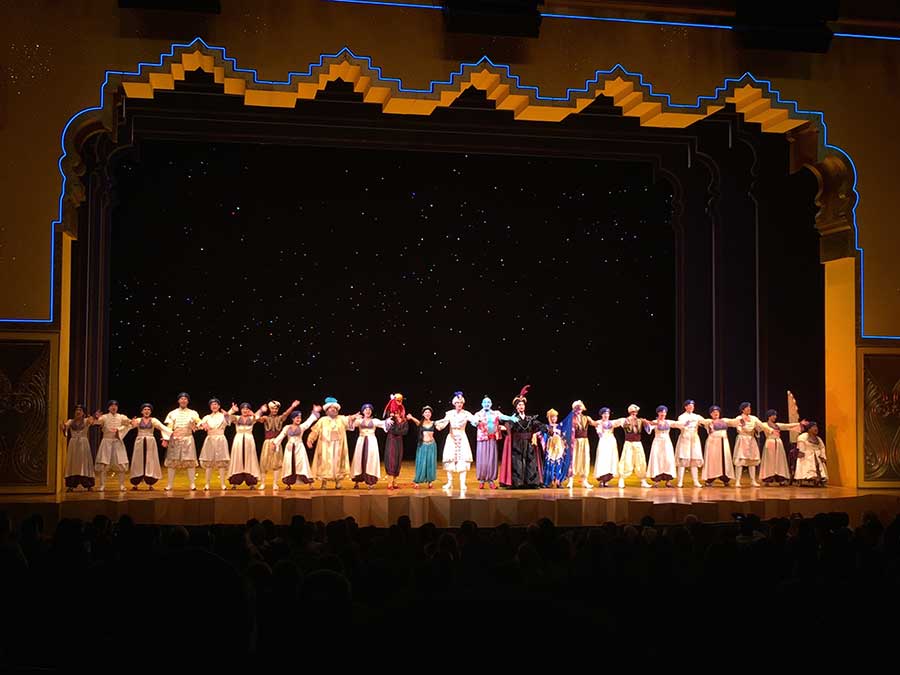 As the day was running away from me, I headed towards Paradise Pier and found myself in an area completely devoid of people. It was remarkable to sit there enjoing the scenery with only faint screams coming from across the lake from the California Screamin’ ride. After about 15 minutes, I went and, like the creep I must have looked like, sat on The Little Mermaid - Ariel’s Undersea Adventure ride. It was a similar clam-chair setup to the Haunted House in Disneyland. The catchy Disney tunes were pretty much all that did it for me on this ride. Two stars, sorry.

Last of all, I jumped aboard Goofy’s Sky School just as it was closing up. A small cart, with abrupt and sharp turns left me unable to feel my legs after the two or three minutes the ride went for. Definitely one for the kids. Three stars.

Realising I hadn’t eaten since breakfast, I grabbed a BBQ sausage hotdog and (potato) chips, and headed towards the carpark tram. Walking through the carpark back to the car was an adventure; whilst I remembered the exact location of the car, I forgot that it was on the other side of the split carpar, so had to backtrack and walk around. Leaving the carpark, I missed the exit ramp. Unfortunately, it’s an unforgiving carpark, meaning I had to do a lap of the entire outside of the floor to get back on to the freeway. 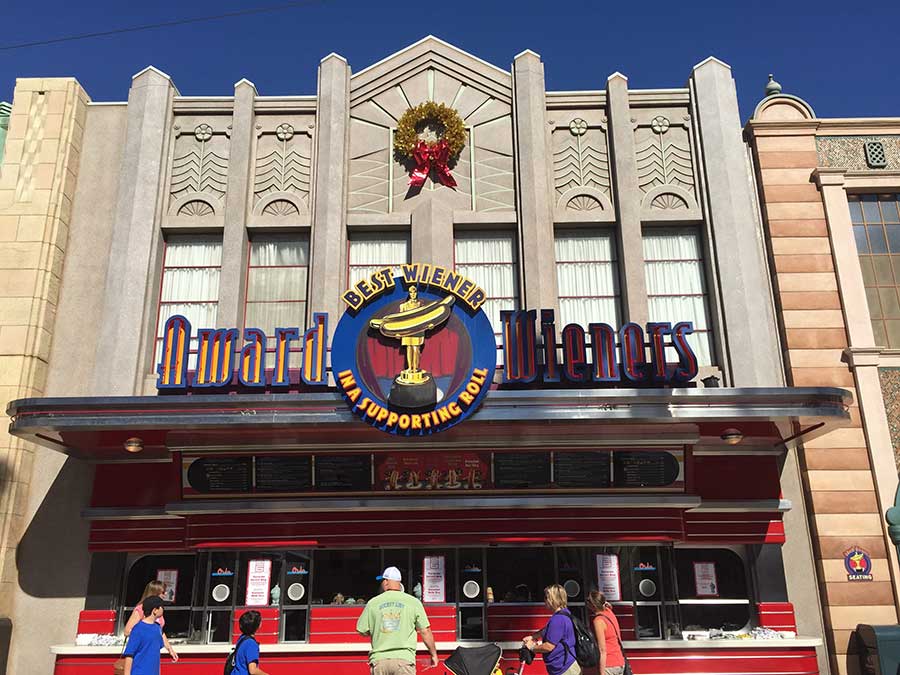 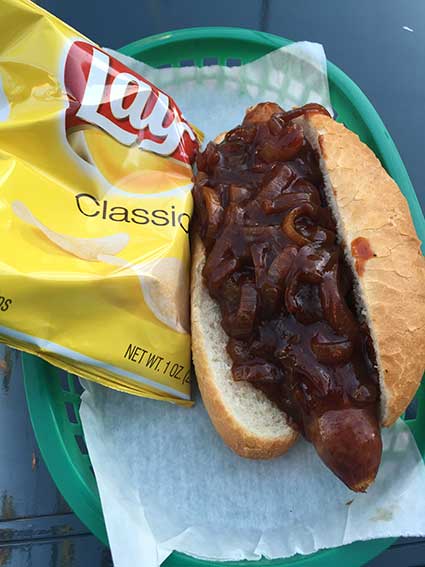 The hot dog wasn't as good as the name

We made it to the car rental place with 20 minutes to spare and jumped straight on the shuttle to the airport, where we grabbed Starbucks frappuccino’s and are now waiting for our flight home. It’s about 30 minutes till boarding, so I better finish up here. That pretty much draws our honeymoon to a close. 17 hours of flights (15 LA -> Sydney, 2 Sydney -> Adelaide, with 1.75 hour stopover) and we’ll (sadly) be home again. 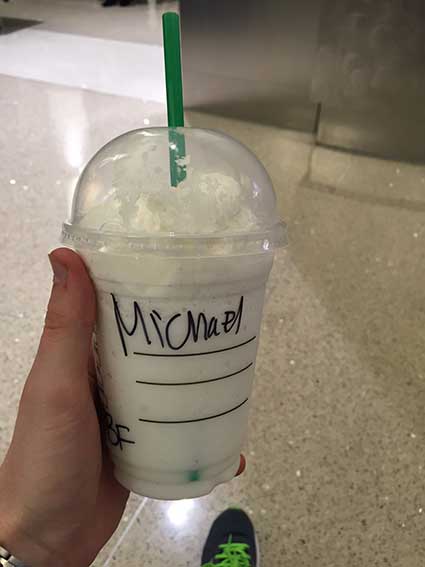 Got it right again! 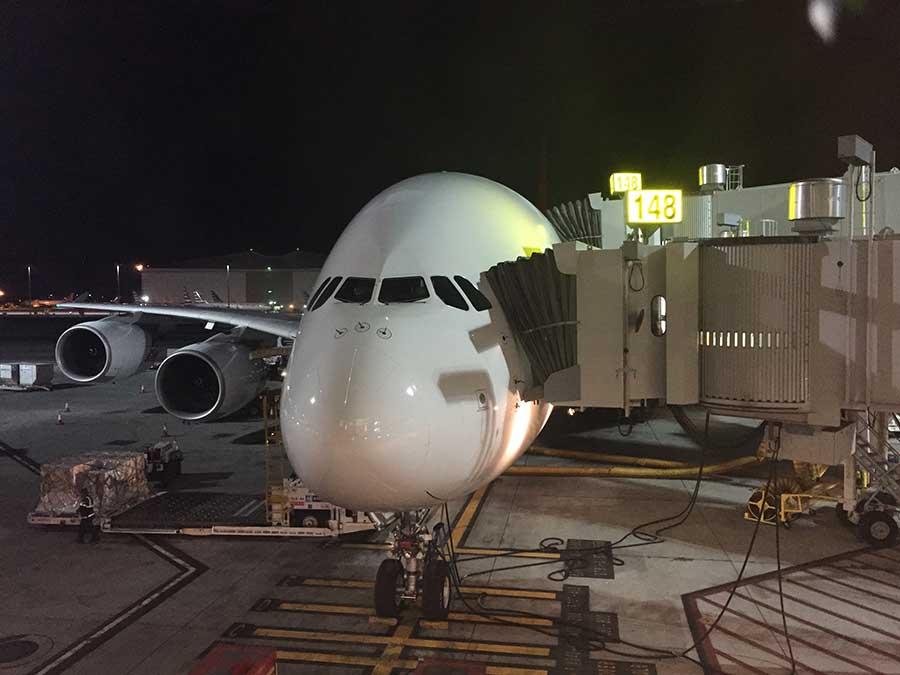