Washington, DC - a whirlwind tour of the nation's capital

We decided fairly early on in our planning that we wanted to visit the capital, but also that we didn’t want to spend too long here. Rhi had booked our two tours and put them in our itinerary as ‘National Mall Segway Tour’ and ‘Monuments & Memorials’. After riding a Segway in Chicago for three hours I was looking forward to walking for a few hours.

Our first tour took us straight down Pennsylvania Avenue, via the Eisenhower Executive Office and Blair House (where visitors to the White House often stay, as well as the incumbent first family before innauguration) to the North Lawn of the White House. We got pretty lucky to visit when Mr. President was in the Oval Office, as indicated by the marine guard by the door. We were onsite around the time he was conducting some very important business. 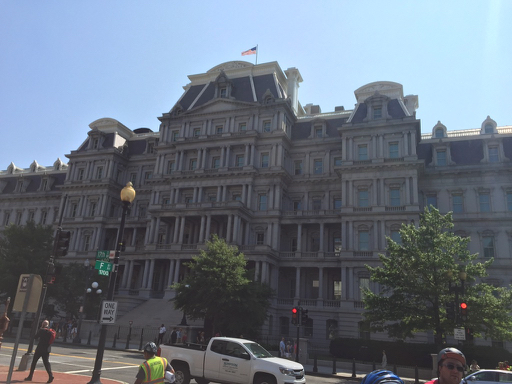 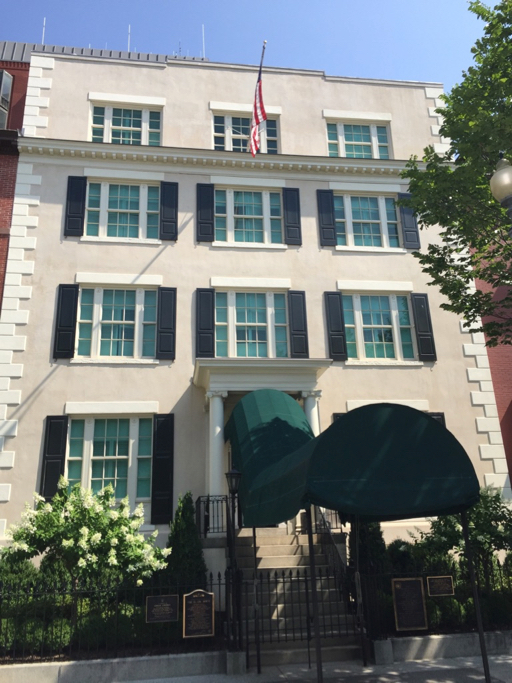 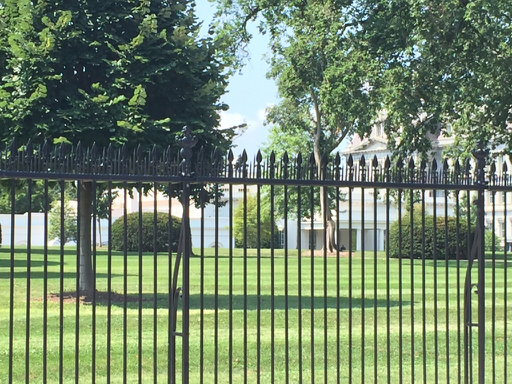 Marine Guard indicating the Eagle is in the nest

The Senate must go to a 51 vote majority instead of current 60 votes. Even parts of full Repeal need 60. 8 Dems control Senate. Crazy! 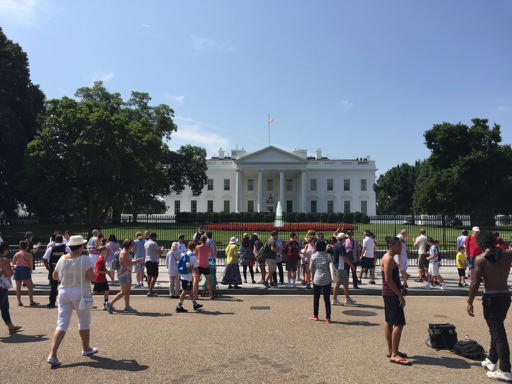 North side of the White House

Fun fact - there’s no back or front entrance, only North and South. This is because no foreign dignitatry wants to be told they need to enter via the back door.

We passed by a statue of Marquis de Lafayette - holding what is said to be clothing for the naked woman below him, who is offering her sword to him in exchange. 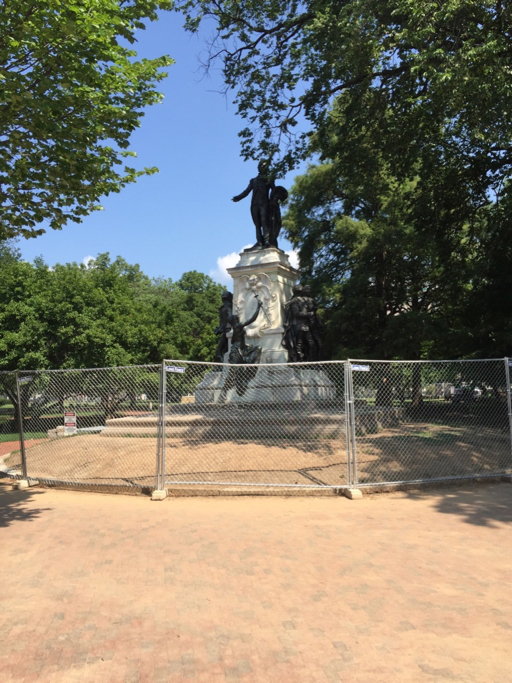 We then made our way to the Capitol Building via the Treasury Department, the Willard Intercontinental - where Martin Luther King penned most of his famous “I have a dream” speech - the J. Edgar Hoover FBI Building, the National Archives Building - where we stopped briefly at Paul for a bite to eat. Terrific food. The French lady on our group said it was the closest thing to food from home she’d had in the USA. We even made a brief detour to Kanuckistan 🇨🇦! 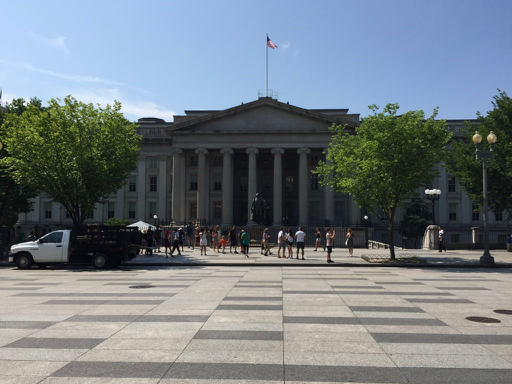 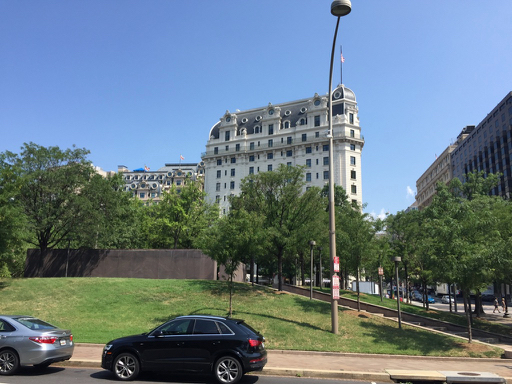 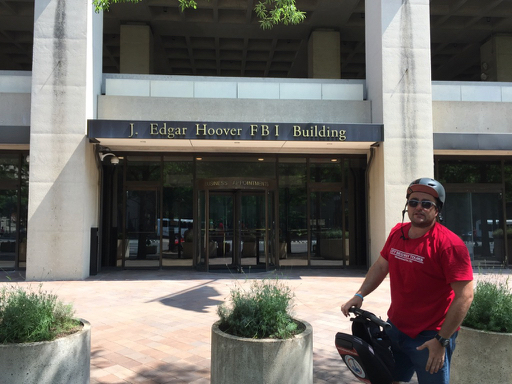 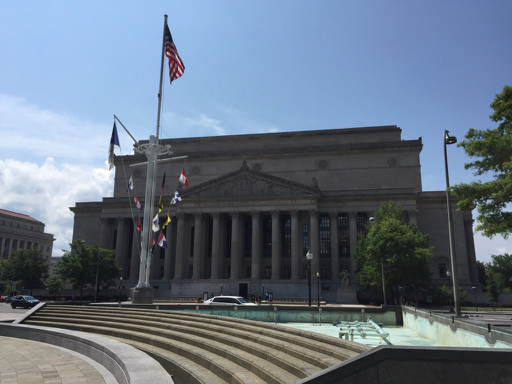 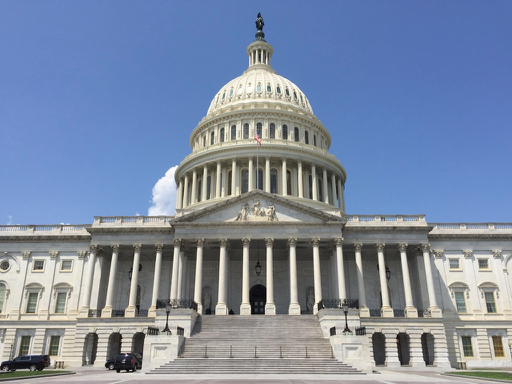 Fun Fact - DC has a long history of naming buildings after folks who hated them. For example, Eisenhower hated the now (old) Executive Office building he wanted it torn down, J. Edgar Hoover wanted nothing to do with the building his name is plastered on.

The rest of this tour saw us swing by the Washington Monument, the newest Smithsonian addition - the African-American History Museum; opened in February, sold out six months worth of tickets in three minutes (!!), and is near-impossible to get in to. We also visited the World War II memorial, the newest and only wheelchair accessible memorial in DC, the Vietnam War memorial, and the Lincoln memorial, which we would return to later in the day.

We went past all of the other Smithsonian museums along the National Mall on the way - Natural History, American History, etc, but didn’t get to take any photos as we didn’t really stop. 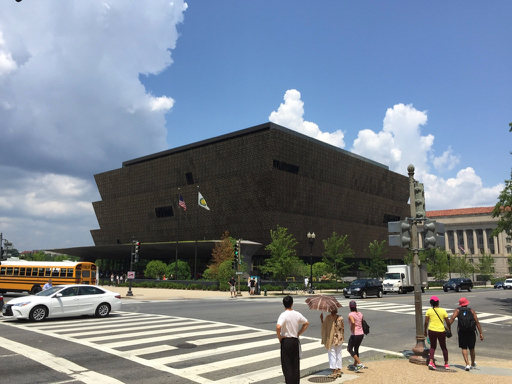 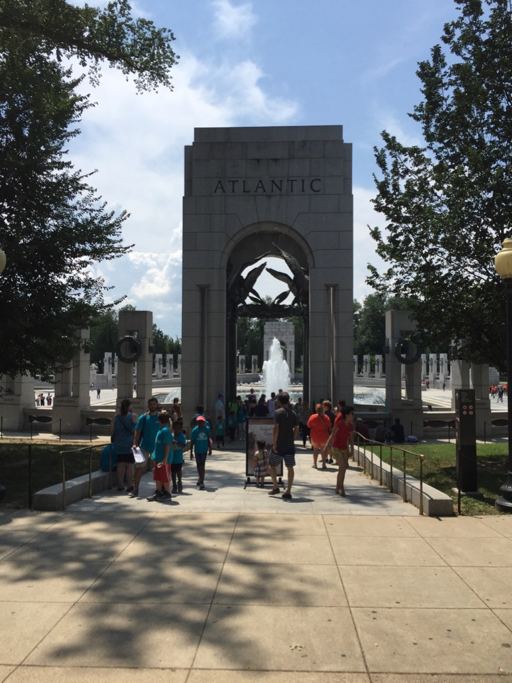 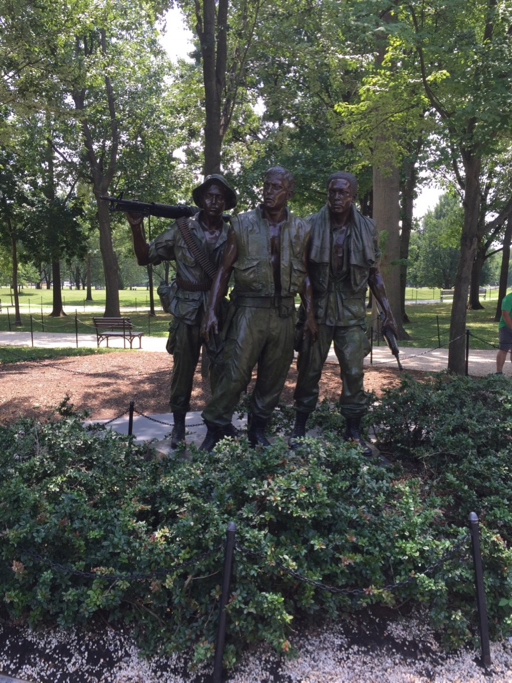 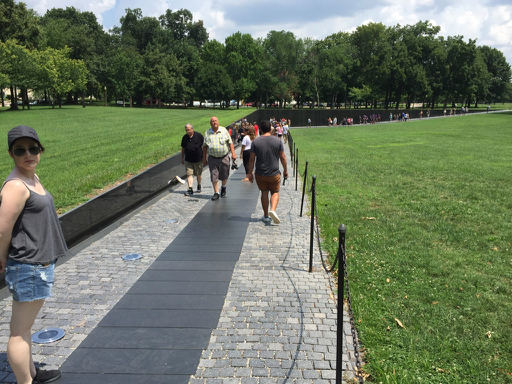 The Lincoln memorial drew close to the first of our two tours. Waiting for others to return to our group before we zipped back to the Segway office was when I came to the conclusion we’d be riding Segways again in the afternoon. At 1pm, it was 32 degrees and approaching 90% humidity. It’s quite exhausting standing for three hours in that climate, even if you’re on a Segway, but we did get rewarded with a freezie (icy pole).

We returned to the office to news of 80% chance of thunderstorms… which plummeted to 30% before we left, and other than about 9 drops of rain, did nothing more than nudge the humidity dial up a little. At least there was a nice breeze once we were on the move.

The second tour took us more specifically to the monuments and memorials around DC.

We first visited the Washington monument, followed by a glimpse at what I would call the more famous side of the White House on the South side - completely rebuilt after it’s destruction in Independence Day - the Jefferson Memorial alongside the Tidal Basin, the Franklin Delano Roosevelt memorial - where Rhi and I discovered there were two different Roosevelts. Lastly, we returned to the Lincoln memorial via the Martin Luther King Jr memorial to get some photos in there as we were pretty stuffed by the end of the first tour earlier in the day.

We returned to the Segway office, enjoyed a second freezie. It was hot (and humid!). Our return to the hotel on foot was via the CVS, which doubles as a supermarket of sorts (or as a chemist, depending on what you consider the primary business) to grab some drinks and snacks for tomorrow’s train, then TGIF for a Jack Daniel’s burger, before getting to sleep by 8pm!

Wednesday we packed our belongings, checked out of the hotel, and ordered a lift to Union Station for the Amtrak to New York. This was all a relatively painless experience - the traffic wasn’t too bad en route, and the station was fairly empty. Planning ahead meant we had to exchange our booking for a paper ticket (self-serve kiosk) and wait to board the train.

3.5 hours went by pretty quickly on the train and we arrived at Penn Station via a long tunnel, so as big as NYC is, we didn’t even see it on the way in. We were bracing ourselves to have to drag our luggage up stairs under instruction from a friend, but were relieved to find both escalators and lifts in the station up to street level.

We stepped outside into the heat (and humidity!) and a sea of school children and bright yellow busses as far as the eye could see. Think beginning of The Dark Knight. We rounded the corner away from the children in hopes of shade (there wasn’t any), but found the taxi rank.

Learning from our experience in Paris, we ignored the man who approached us offering a ride - O’Hare even had signs warning against this (illegal) behaviour - and jumped in the cab for a relatively short ride. I certainly wouldn’t be wheeling two suitcases down the road to Times Square.

If you ever have a chance to stay at the W New York - Times Square, you’re in for a treat. As we stepped inside off the street, we were greeted by a waterfall/fountain that goes over your head (under glass). The lobby / welcome area was up on the seventh floor. The lifts are quite big and tall and play some catchy tunes.

Our room is a corner suite on the 24th floor, overlooking the edge of Times Square. 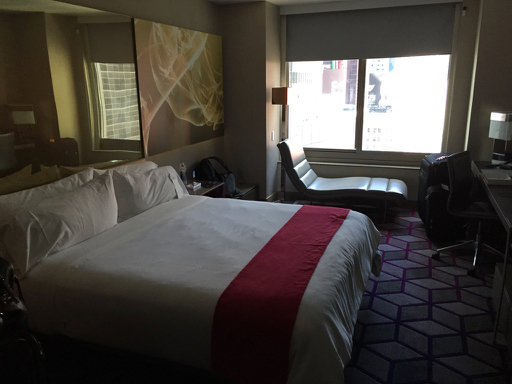 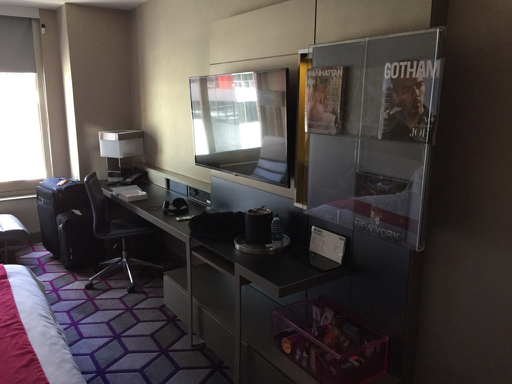 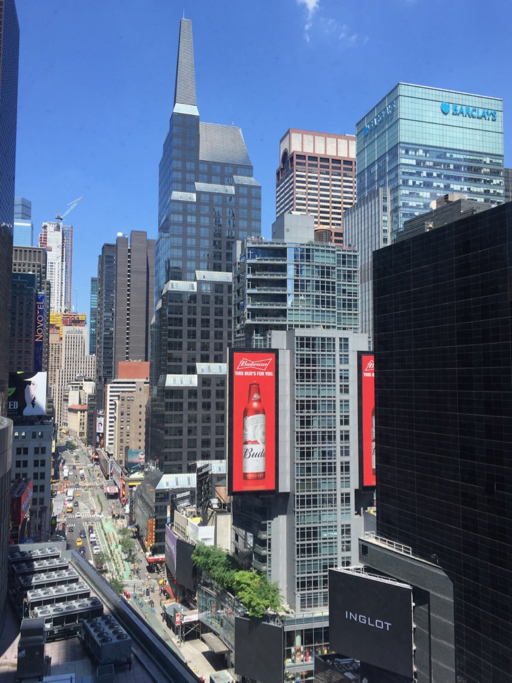 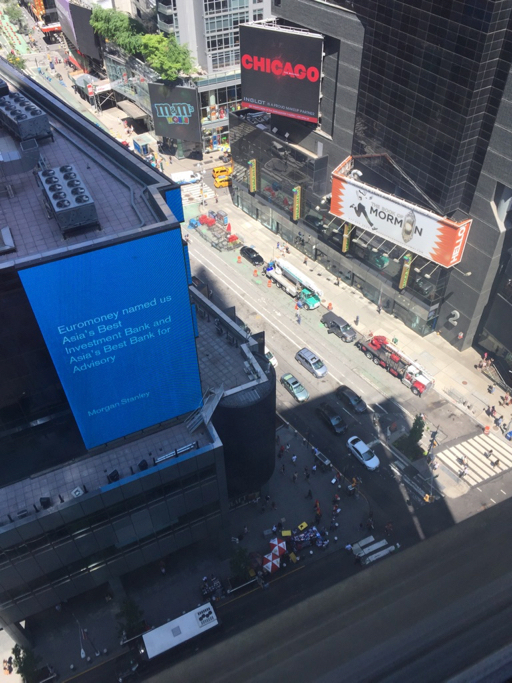 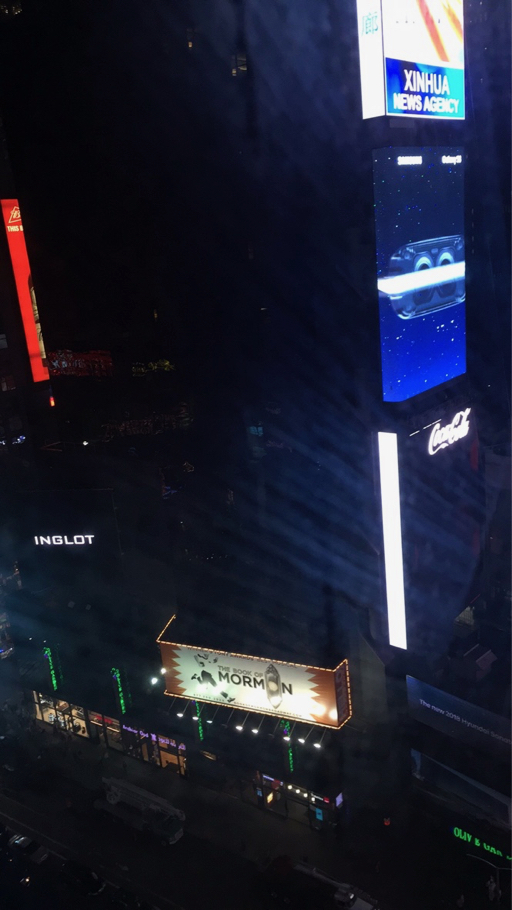